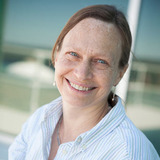 Ritchie Patterson
Director Ritchie Patterson is one of five Cornell faculty elected fellow of the American Association for the Advancement of Science (AAAS), the world’s largest general scientific society. Ritchie Patterson professor of physics in the College of Arts and Sciences, was honored for her leadership, particularly as the director of the Cornell Laboratory for Accelerator-Based Sciences and Education (CLASSE), a multidisciplinary center serving researchers from across the country and around the world. The association elected 443 new fellows in 2019, honoring their efforts to advance research and its applications in scientifically or socially distinguished ways. New fellows will be presented with an official certificate and a gold and blue (representing science and engineering, respectively) rosette pin at the AAAS annual meeting, Feb. 15, 2020 in Seattle, Washington.. Congratulations Ritchie! This article originally appeared in the Cornell Chronicle: http://news.cornell.edu/stories/2019/11/five-faculty-members-elected-aaas-fellows