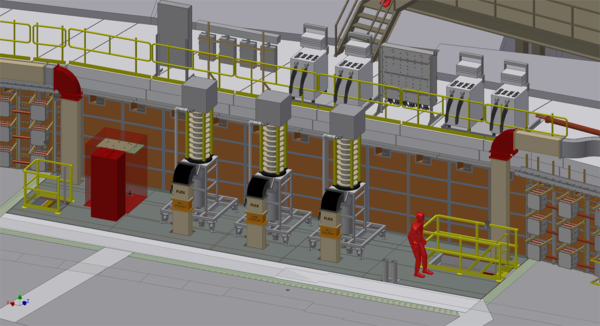 The future and final position of the klystrons after the move. This area is in L0, above the pit in the former location of the CLEO detector.
The RF transmitters, which power the superconducting cavities of CESR, are in the daunting process of relocating in order to accommodate the realization of CBETA and CHESS-U. To facilitate this move and allow for a seamless transition, the RF team has connected a processing transmitter located in the west end of L0 the east cavities of CESR, while the former east-powering transmitter in L0E has been disabled. This has ensured a seamless transition after a busy summer down. The east transmitter, which powered the east RF cavities of CESR, is currently located in the path of the CBETA project and needs to relocate to allow the ERL ring to be constructed. Now that the high voltage of this east transmitter is shut off, the team can start preparing the physical move to its final and long-term destination. The west transmitter located in L0, which powers the west RF cavities remains in place and is unchanged. The processing transmitter in L0 has now been converted to power the east cavities via a waveguide that was constructed over the shielding wall in L0. However, this set up will soon change as these transmitters will have to relocate from this location next summer as new hutches start populating this space with the CHESS-U upgrade. 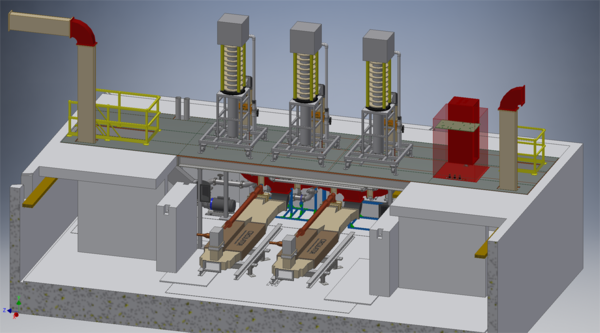 The pit, viewed from the Southeast, showing the final position of the klystrons.
The final location of the RF transmitters is in the former area of CLEO in L0. A pit cover was put in place on the north side of CESR to support the final position of the klystrons, where three in total will reside. One klystron will serve the east cavities, one for the west, and one to serve as a backup in case of an unforeseen failure. As expected, the RF team has been able to plan and implement such a move with little to no impact on operations. An impressive feat.