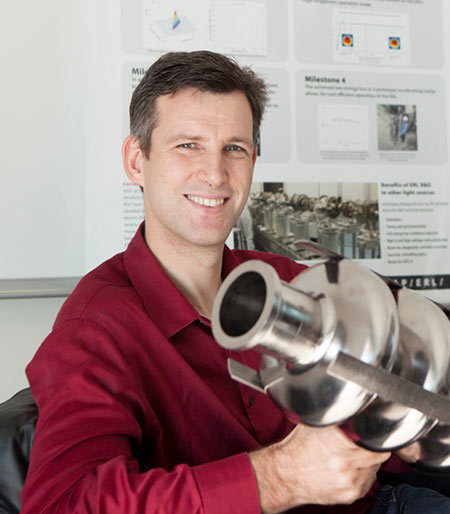 Professory Goerg Hoffstaetter, Principal Investigator for CBETA, has been elected a 2017 Fellow of the American Physical Society
Congratulations to Georg Hoffstaetter who has recently been elected a 2017 Fellow of the American Physical Society (APS). This honor is given by the APS Council of Representatives upon the recommendation of the Division of Physics of Beams (DPB). The number of APS Fellows elected each year is limited to no more than one half of one percent of the membership. It is a prestigious recognition by peers of Georg's outstanding contributions to physics. Georg's leadership and contributions to the ongoing success of the CBETA project is being recognized by peers from around the world. The criterion for election is exceptional contributions to the physics enterprise through outstanding physics research, important applications of physics, leadership in or service to physics, or significant contributions to physics education: all of which Georg has accelled. Fellowship is a distinct honor signifying recognition by one's professional peers. Professor Hoffstaetter's research is accelerator and beam physics, and the study of accelerated beams as a special state of matter. He is the Principal Investigator for the CBETA Project at Cornell which will constitute a novel x-ray light source with beams significantly better than those of the world's most advanced facilities. X-ray beams from charged particle accelerators have become an essential tool in today's investigation of all types of materials, from airplane wings to cell membranes and from pollutants in leaves to matter under earth-core pressures. Congratulations Georg!