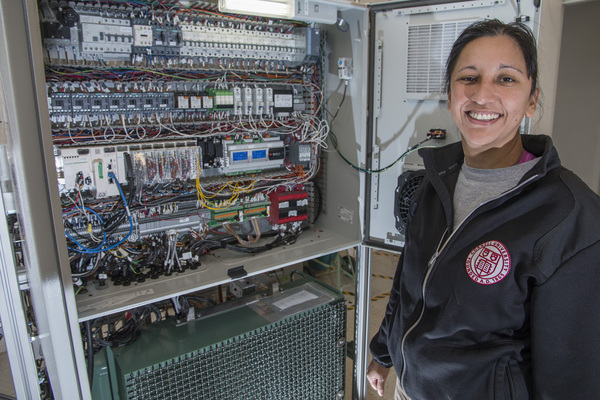 Yadira Bordlemay Padilla opens the cooling plant being built in Newman Laboratory on the Cornell University campus.
The Compact Muon Solenoid (CMS) is one of the two largest experiments that are being carried out at CERN (the second being ATLAS) (CERN). It contributed to the discovery of the Higgs boson in 2012, and more recently revealed how strongly the Higgs interacts with the top quark (press release), further proving the experiment's important role in physics. The CMS detector is now undergoing its phase II upgrade in view of the High-Luminosity Large Hadron Collider (HL-LHC) project. Personnel from several institutions are now working on this upgrade, and Cornell is playing a major role in the project. Cornell's team of high energy physicists and engineers are in charge of the mechanics and integration of the detector, including its design, testing and final construction, and administration.

The HL-LHC project is expected to enhance the sensitivity of the LHC, which CERN hopes will increase "the potential for discoveries" after it is turned on in 2025. The phase II upgrade is necessary due to the high radiation levels and increased data expected from HL-LHC (paper by IOP). Originally, the inner forward pixel detector had one ring of silicon pixel detectors. The phase I upgrade (in 2017) gave it three and phase II will further increase this to eight. Four rings will also be added to the external pixel detector. The complete new detector will be more compact; the barrel and pixel detector, which were previously separate, will now be combined, by cantilevering the barrel detector to the pixel detector. Cornell is in charge of cantilevering this. "Right now we are in the Research and Development phase," says Yadira Bordlemay Padilla, a mechanical engineer at CLASSE. "And that goes on until 2020. After 2020, we start full-scale production of the detector." Researchers are currently working on completing the design and are carrying out preliminary testing of some of the existing designs. Cornell is conducting the thermal side of this preliminary testing by testing structures to ensure that they can withstand the required temperatures. The final detector will be assembled at Cornell by combining components built here and at the other institutions, and will afterwards be sent to CERN. The upgrade is scheduled to be completed by 2024. 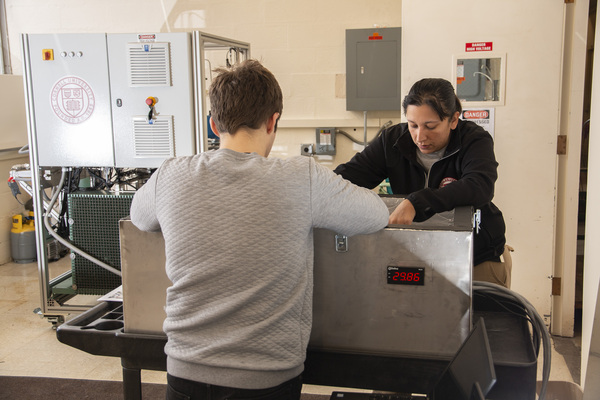 Bordlemay Padilla works with an undergraduate researcher to test the efficiency of the cooling design.
Having the opportunity to take part in a project geared towards upgrading what is currently the world's most powerful accelerator might seem very incredible, and, in fact, this is exactly what Bordlemay Padilla is doing. She has been working on CERN's CMS detector upgrade ever since she started at Cornell three years ago. "It's a fun project; it's a very international project," says Bordlemay Padilla. She works primarily on the mechanics aspect of the upgrade and is contributing to the preliminary testing of the designs that is being carried out at Cornell. 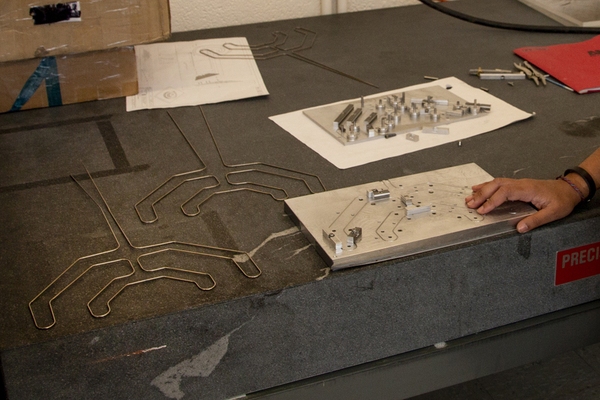 The devices created to shape the cooling components of the microchips inside the detector.
She is also the engineer for the cooling plant that has been designed to cool the detector, specifically, its microchips. Using carbon dioxide, the detector is cooled to between -30 and -35 C. "Imagine a sandwich, and inside the sandwich you put a straw, and the straw is meant to keep the sandwich cold," explains Bordlemay Padilla. "And on top of the sandwich you have little microchips. You have liquid going through the straw making the sandwich cold." This cooling is important for both the R&D phase and final production to observe the response of electronics at a range of temperatures. Working on this upgrade can be quite challenging. For instance, there are numerous meetings with those involved from around the world, for which she has to either be physically present or participate online. "Meetings can start at one in the morning," she says. She suggests that these meetings are an integral part of the upgrade, keeping the large number of institutions and individuals involved well-informed about any progress and future proceedings. Another point is that changes to the design may take a while to be approved because individuals from around the world have to reach a consensus. Then there is the actual design of the detector. "We have a general idea of what the detector looks like," informs Bordlemay Padilla. This is because researchers have to actually develop it starting with their goal of how it should function. As its specifications change nearly every year, she says that it is quite a task to make a design and keep up with how quickly things change.

Bordlemay Padilla has several upcoming meetings in Europe, including CERN, of course, where ideas on building, testing and implementing the detector will be shared among colleagues. There will be a final design review at the end of June. In fact, there are design reviews every couple of months, where progress and new ideas are discussed. Any changes discussed are implemented. In July, researchers will be completing analysis of some detector components to be built and labs, including several students, will be building a large number of mockups of components. In the coming three to six months, mockups will be completed and studies on installing the detector will be prioritized.

How's all this going to help?

Apart from being an exciting ground on which to apply one's knowledge and skills, the CMS upgrade, as part of HL-LHC, will contribute immensely to our understanding of physics. Taking the Higgs boson as an example, the CMS contributed to its discovery when it had only 1 ring of silicon detectors. The new detector will have eight. According to CERN " ... the High-Luminosity LHC will produce up to 15 million Higgs bosons per year, compared to the 1.2 million produced in 2011 and 2012." - Gayathrini Premawardhana, CLASSE