The Higgs boson reveals its affinity for the top quark 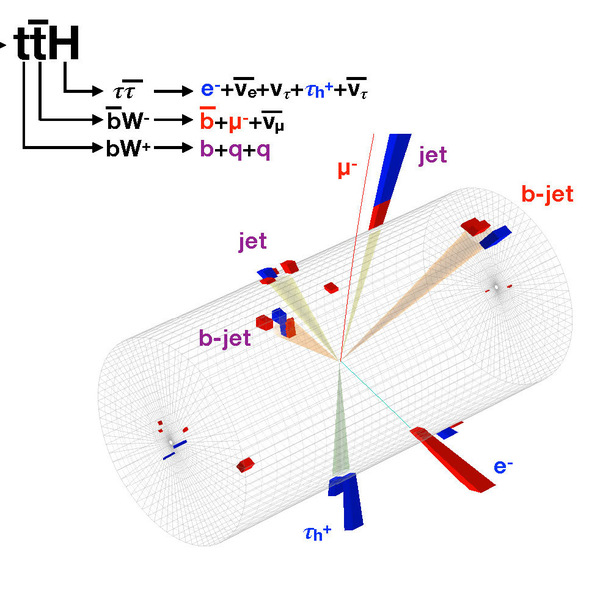 New results from the ATLAS and CMS experiments at the LHC reveal how strongly the Higgs boson interacts with the heaviest known elementary particle, the top quark, corroborating scientists' understanding of the Higgs and setting constraints on new physics..
Scientists' understanding of the famous Higgs boson was expanded even further last week by new results from the ATLAS and CMS experiments at the Large Hadron Collider at CERN. The collaboration, in which Cornell plays a major role in the CMS experiment, helped reveal the boson's affinity for the top quark, the most massive of all observed elementary particles. The Higgs boson interacts only with massive particles, yet it was discovered in its decay to two massless photons. Quantum mechanics allows the Higgs to fluctuate for a very short time into a top quark and a top anti-quark, which promptly annihilate each other into a photon pair. The probability of this process occurring varies with the strength of the interaction (known as coupling) between the Higgs boson and top quarks. Its measurement allows us to indirectly infer the value of the Higgs-top coupling. However, undiscovered heavy new-physics particles could likewise participate in this type of decay and alter the result. This is why the Higgs boson is seen as a portal to new physics. The new results provide further evidence that the Higgs boson that was first observed in 2012 is compatible with the predictions from the Standard Model of particle physics, and opens up possibilities for further precision studies of the Higgs-top interaction. "With more data coming in from Run 2 of the LHC, I am really looking forward to an exciting time where we can make further improvements to this analysis to understand this interaction vertex better" says Abhisek Datta, a graduate student in physics at Cornell. A more direct manifestation of the Higgs-top coupling is the emission of a Higgs boson by a top--anti-top quark pair. Results presented last week, at the LHCP conference in Bologna, describe the observation of this so-called "ttH production" process. Results from the CMS collaboration, with a significance exceeding five standard deviations (considered the gold standard) for the first time, have just been published in the journal Physical Review Letters; including more data from the ongoing LHC-run, the ATLAS collaboration just submitted new results for publication, with a larger significance. Together, these results are a great step forward in our knowledge of the properties of the Higgs boson. The findings of the two experiments are consistent with one another and with the Standard Model, and give us new clues for where to look for new physics. "These measurements provide further evidence that the Higgs boson that was first observed in 2012 is compatible with the predictions from the Standard Model of particle physics, and opens up possibilities for further precision studies of the Higgs-top interaction," says Datta. Cornell's specific involvement in this large project included analyzing two of the decay channels of ttH production, validating and cross-checking of physics object and event selections. This complicated analysis involves many steps and special procedures, the team wanted to make sure each analysis channel was covered by at least two groups of independent software frameworks to give the same result. The team also contributed to the optimization of histogram binning for statistical analysis and signal extraction, expediting the overall arduous process. Measuring this process is challenging, as it is rare: only 1% of Higgs bosons are produced in association with two top quarks and, in addition, the Higgs and the top quarks decay into other particles in many complex ways, or modes. Using data from proton-proton collisions collected at energies of 7, 8, and 13 TeV, the ATLAS and CMS teams performed several independent searches for ttH production, each targeting different Higgs-decay modes (to W bosons, Z bosons, photons, τ leptons, and bottom-quark jets). To maximise the sensitivity to the experimentally challenging ttH signal, each experiment then combined the results from all of its searches. It is gratifying that this result has come so early in the life of the LHC program. This is due to the superb performance of the LHC machine and of the ATLAS and CMS detectors, the use of advanced analysis techniques and the inclusion of all possible final states in the analysis. However, the precision of the measurements still leaves room for contributions from new physics. In the coming years, the two experiments will take much more data and improve the precision to see if the Higgs reveals the presence of physics beyond the Standard Model. "Although it could have been more intriguing if we don't see ttH signal as predicted by the SM, which indicates new phenomenon, new physics, and potentially new jobs, we played a supporting role of this discovery in the previous analysis," says Zhengcheng Tao, Cornell graduate student in physics. 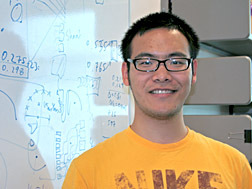 Tao.
The work isn't all complicated analysis, as Tao points out some added benefits to these large research projects, "Working on an international collaboration is the best part," he says "as I get to meet and talk with people from different cultural backgrounds, and the croissants at CERN cafeteria are amazing".