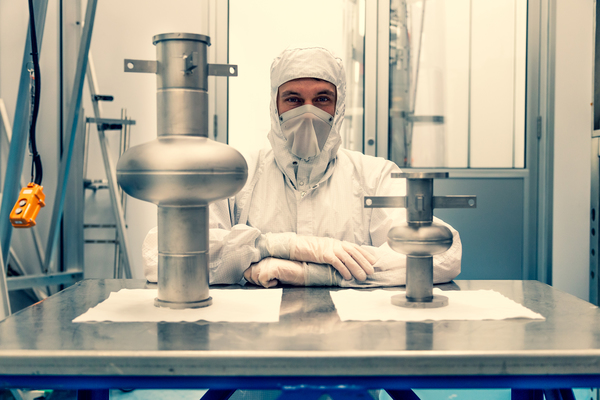 Cornell SRF graduate student Ryan Porter in the clean room of Newman Laboratory with a standard 1.3 GHz cavity and the compact 2.6 GHz Nb3Sn cavity
Superconducting Radio Frequency (SRF) cavity technology is the gold standard for the acceleration of charged particle beams, and is used in places like the Large Hadron Collider (LHC) at CERN and the upcoming LCLS-II Free-Electron-Laser X-ray source at SLAC. Currently, the material of choice for the world's accelerating cavities is niobium, which frequently has to be operated at a low cryogenic temperature around 2 degrees Kelvin (-456 degrees Fahrenheit) and requires costly cryogenic equipment to cool the cavity in a bath of superfluid liquid helium. Because of this obstacle SRF is currently only heavily used at large-scale accelerators, but not at smaller institutions or industry due to the complexity and costs associated with this technology. SRF researchers around the world are striving to create better accelerators by removing some of the barriers prohibiting smaller institutions and industrial users from taking advantage of this powerful technology. Two major obstacles still need to be overcome to make this possible, primarily the temperature of operation and the size of the cavity. A team at Cornell has now made an advancement towards simpler, smaller and more economical particle accelerators, demonstrating that small, high frequency triniobium-tin (Nb3Sn) SRF cavities can be operated very efficiently at a higher temperature; this is not achievable with niobium cavities. This breakthrough will allow to greatly expand the use of SRF technology in the future. Cornell is researching the compound superconductor Nb3Sn for next-generation SRF cavities, particularly looking at the coating development of the compound. Nb3Sn can operate very efficiently at 4.2 Kelvin, a small but considerable jump up in temperature that slashes the complexity and costs of cryogenic cooling equipment by omission of superfluid helium refrigeration needed to operate at 2 Kelvin. 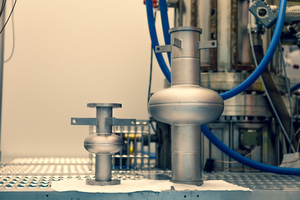 Fabrication, coating, and testing was all done at the SRF facility in Newman Laboratory.
As labs look to broaden the availability of accelerating cavities, the promise of higher temperatures is appealing. "The key is that we need to graduate away from the superfluid helium operation. A superfluid helium refrigerator is expensive, and complex", Matthias Liepe, Professor of Physics at Cornell, and director of the university's SRF program says. "Superfluid helium operation is one of the key barriers why this technology is used primarily for science at big accelerators, but not really used in small accelerators, and definitely not yet in industry. " While achieving a temperature milestone is important, size also matters. The size of the actual cavity is directly related to the frequency of the oscillating radio-frequency electromagnetic field within the cavity. This relationship is inverse - as the frequency doubles, the size of the cavity is halved. A smaller cavity with a higher frequency means having a smaller cryomodule as well, and what was once one-meter in diameter, a typical size of accelerating SRF cryomodule, can now be roughly half that size. 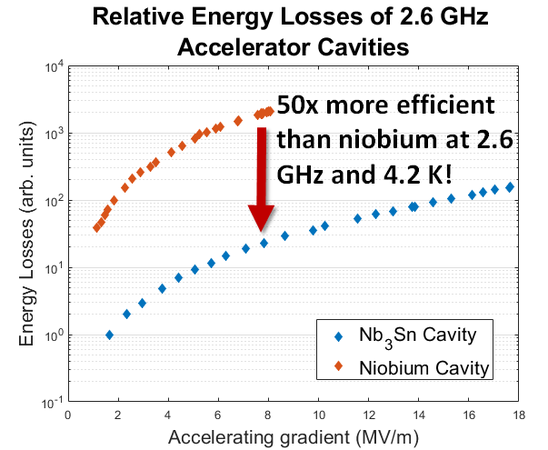 Comparison of the cryogenic load of a niobium 2.6 GHz cavity and the new 2.6 GHz Nb3Sn cavity, showing a factor of 50 reduction in cooling energy use when both operated at 4.2 Kelvin.
According to Liepe, the vast majority of SRF cavities currently in use are at frequencies of 1.5GHz and below. This lower frequency range is heavily favored due to the fact that RF power losses in a superconductor rapidly decrease at lower frequency, but it results in large SRF accelerating structures. While use of large niobium cavities is feasible for large-scale science projects like LCLS-II, they are not ideal for a widespread adoption. Ryan Porter, graduate student in Liepe's group, now successfully made and tested a considerably smaller proof-of-principle Nb3Sn cavity at 2.6GHz with promising results. "There is a lot of potential for performance to get worse at higher frequencies. Niobium cannot operate efficiently at 2.6GHz and 4.2 Kelvin," Porter explains. "But the performance of this 2.6GHz Nb3Sn cavity was just as good as the 1.3 GHz performance. Compared to a niobium cavity, at the same temperature and frequency, it was 50x more efficient." "This is really the first step that shows that you can get good 4.2 Kelvin performance at high frequency, and it is quite promising." Liepe says. "The dream is to have an SRF accelerator that can fit on top of the table." This development of smaller, more efficient SRF accelerating cavities is supported by the National Science Foundation under Grant No. PHY-1734189, while the development of the Nb3Sn cavity coating technology is supported by the DOE, Office of Science, Office of High Energy Physics under Award No. DE-SC0008431. The Center for Bright Beams, a National Science Foundation-funded Science and Technology Center led by Cornell, to which both Liepe and Porter contribute, is employing the expertise of materials scientists, surface chemists, and condensed matter physicists to advance first principles understanding of Nb3Sn material growth and RF superconductivity, and has been an important partner in developing the Nb3Sn coating recipe used for the 2.6 GHz cavity. Any opinions, findings, and conclusions or recommendations expressed in this material are those of the authors and do not necessarily reflect the views of the National Science Foundation or the Department of Energy.