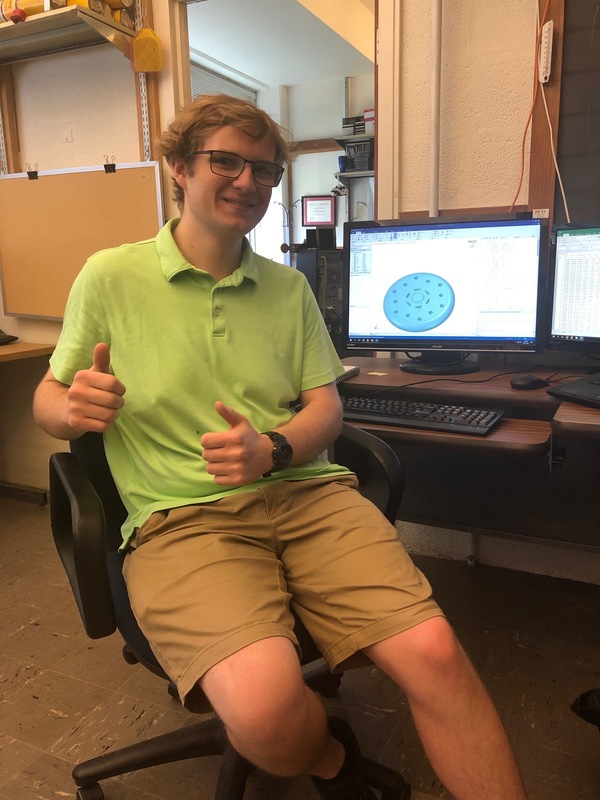 Mattias at his desk in Newman Lab
In particle accelerators, electromagnetic fields are generated within a chamber causing charged particles to accelerate forward. This chamber is the radio frequency cavity . The SRF Group at Cornell is dedicated to investigating superconducting radiofrequency cavities. The superconducting material allows a greater portion of the energy stored in the cavity to be used for particle acceleration rather than be lost as heat. SRF cavities are present in a majority of the major particle accelerators in use today, but they present their own set of challenges. "[This] is why we have an entire research group dedicated so it," said Mattias McMullin, Math and Physics major at Lawrence University in Wisconsin, and participant in this year's SUnRiSE program at CLASSE. He is working with Matthias Liepe, Associate Professor of Physics and SRF Group Leader, this summer.

For Cornell to take superconducting RF cavities to the next step for applications in particle accelerators, researchers need to design cavities capable of handling high energy while retaining their superconductivity properties. [It's] like a tank of water; if you hit one side, you would have a flat wave; drop a rock, you would have a radial shape," said Mattias. Acceleration requires a certain configuration of the electric field, called the accelerating mode, with a specific frequency. Other modes will cause beams of particles passing through to be knocked off course instead of accelerated. When particles are accelerated they cause wakefields, which can be all different frequencies. This is more of an issue for SRF cavities because fields decay slower so wakefields do not get absorbed as fast, and even weak ones can cause disturbances. For the SRF cavity to operate smoothly, researchers need to be able to control frequency very precisely, within a millionth of a percent accuracy. They have been working on tuning cavities without a band gap for several decades but using photonic band gaps in SRF cavities is a newer innovation. Mattias's summer project revolves around determining how photonic band gap structures, or photonic crystals, can be used to select for the waves with the right frequency.

Simulating how the PBG Structures Would Work 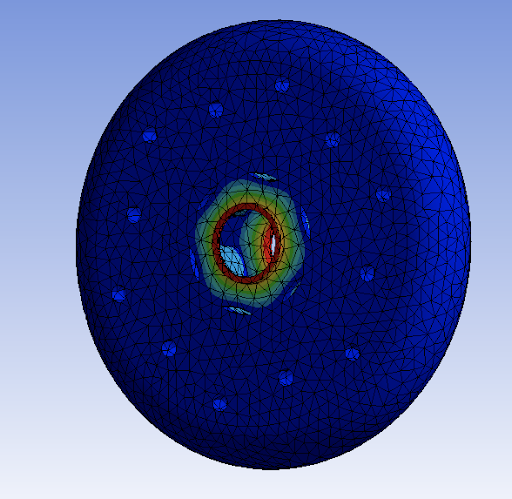 A color map showing the deformation of a PBG cavity subject to a 'sandwich' force
The photonic bandgap structure only allows waves of certain frequencies to pass. It traps the "good" waves in the middle of the cavity, while others propagate. Accelerating mode frequency is defined by the geometry of the cavity, so changing that geometry will change the frequency. The first part of Mattias's project focuses on deforming the cavity structure mechanically using ANSYS software. "The correlation between geometric parameters and things like the accelerating mode's frequency isn't very intuitive, so I'm developing models to quantify this relationship to better understand how a tuning system might function." he said. Photonics band gap structures are also less characterized than normal cavities, so researchers like Mattias need to figure out how to tune them. Hork at the moment involves running simulations: first the mechanical simulation that changes the parameters of the structure, then a simulation that models the behavior of the electric field in response to those mechanical changes. The ultimate goal is perfecting a machine learning algorithm using thousands of points of parameter data. This algorithm would eliminate the need for running the two simulations one after another, which takes time to produce significant data. "I run simulations overnight a lot of the time," said Mattias. He is perfecting a machine learning algorithm that would output expected frequency in response to parameter data input. After this algorithm is complete, testing designs of the photonic bandgap structure would become much more efficient with the simulations, and would hopefully allow these structures to be incorporated in more SRF technology in the future. -Catherine Cai is a Communications Assistant for CLASSE