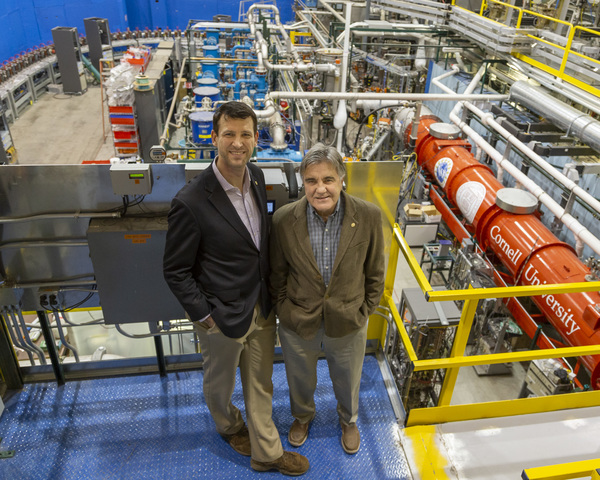 Georg Hoffstaetter (left) and Dejan Trbojevic at the CBETA facility at Cornell University.
In the early morning of Dec. 24, 2019 – days ahead of a critical deadline, and just hours before Cornell closed its facilities for winter break – the physicists developing an energy-conserving particle accelerator that was first envisioned more than 50 years ago achieved something they’d hardly dared to imagine: success. “We could not believe it,” said Georg Hoffstaetter, professor of physics and a principal investigator for the Cornell-BNL ELR Test Accelerator Facility, known as CBETA. “The team had been in the control room for weeks until often 2 or 3 a.m., and then things finally came together on the last day before vacation – it was just a miracle. None of us could sleep.” CBETA, constructed in collaboration with Brookhaven National Laboratory at Cornell’s Wilson Synchrotron Lab, is the first of a new breed of accelerator, which can provide particle beams with unprecedented properties and power by capturing and reusing the energy of the accelerated beams. Its construction was funded primarily by the New York State Energy Research and Development Authority. The accelerator saves additional energy by steering the beams with permanent magnets, instead of electromagnets, and by accelerating the beams with superconducting radio frequency units. The successful technology is poised to transform the field, with new capabilities that can power the world’s largest accelerators to help scientists unlock the mysteries of the universe. Large particle accelerators can consume up to half a gigawatt of power – about half the capacity of a nuclear power plant. This makes it impossible for the machines to perform certain functions, both because of the cost and the risk of melting components. CBETA – a collaboration between scientists from Cornell, the U.S. Department of Energy’s Brookhaven National Laboratory on Long Island and nine other institutions – reduces that energy requirement by large factors. A key test in June showed that the accelerator can recoup about 99.8% of its beams’ energy. That means the energy provided to the main accelerating unit accelerates 500 times more beam than it would without energy recovery. With its successful run on Dec. 24, CBETA realized a goal that was more than 50 years in the making – since Maury Tigner, Ph.D. ’64, the Hans A. Bethe Professor Emeritus, in 1965 developed the concept of using energy recovery to power the acceleration of electron beams. “The technology was envisioned, but it took a long time to make the superconducting cavities good enough to store so much energy,” Hoffstaetter said. “This is a very important achievement, and we worked a very long time on it. We had to build everything from scratch.” 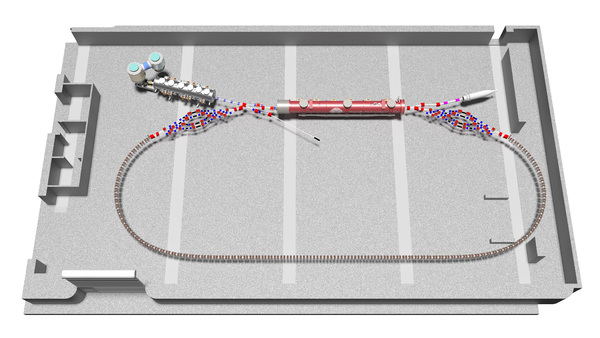 CBETA functions by looping a particle beam back to the same linear accelerator – or “linac” – four times, approximately quadrupling its energy, to produce a four-turn recirculating linac. The team then decelerated the beam four times through the same loops and the same linac, recapturing the beam’s energy. The superconducting accelerating structures store this energy to be available for the acceleration of new beams. The seven beams looped back to the linac have four different energies, but CBETA can transport them simultaneously using permanent magnets. This is also a first, thanks to new developments from the Brookhaven lab. During the successful test run in June, the particle beam made one pass through the accelerator – a milestone that has been achieved elsewhere but never before at Cornell. On Dec. 24 CBETA became the world’s first accelerator to succeed with multiple turns. “This is really important because several projects in the world are based on the hope that this could be done,” Hoffstaetter said. “Showing that it works opens up a whole new space for future projects.” These unprecedented particle beams have potential applications in areas including elementary particle physics, nuclear physics, computer chip printing and X-ray science. CBETA’s success will also impact the development of the proposed Electron-Ion Collider, the next large accelerator planned for nuclear physics in the US. That machine would collide electrons with protons and nuclei in order to shed light on the little-understood inner workings of atomic nuclei and the building blocks of matter. The National Academy of Sciences identified the Electron-Ion Collider as the nation’s highest-priority large accelerator for nuclear physics. The successful demonstration of CBETA – the first new particle accelerator developed at Cornell in 40 years – marked the final milestone of the researchers’ three-year plan, which called for the accelerator to function successfully by the end of 2019. “The team is especially proud to have achieved this breakthrough on time,” Hoffstaetter said. This article originally appeared in the Cornell Chronicle.