Cornell is leading a $77 million effort, beginning April 1, to upgrade the Compact Muon Solenoid (CMS) experiment at the Large Hadron Collider (LHC) at the European Organization for Nuclear Research (CERN). The LHC is a 17-mile loop of superconducting magnets and accelerator structures that crashes particles together, revealing fundamental interactions of matter. The upgrade project will expand the capabilities of the CMS detector, which physicists use to study particles – such as the elusive Higgs boson, discovered in 2012 – produced by these high-energy, proton-proton collisions. 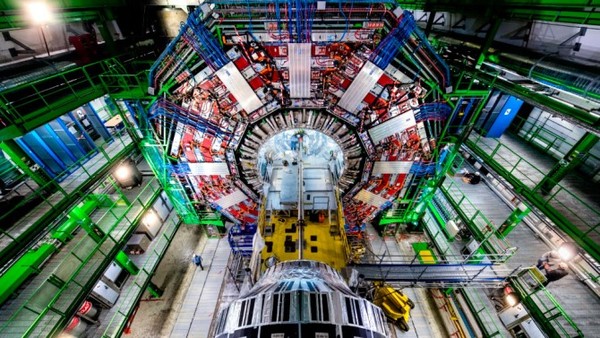 Compact Muon Solenoid detector - CERN/Provided
Cornell is leading a $77 million effort to upgrade the Compact Muon Solenoid detector that can identify and characterize elementary particles produced in high-energy collisions. The upgrade will enable CMS to collect ten times as much data while also adding new detector capabilities, according to Anders Ryd, professor of physics in the College of Arts and Sciences, who leads the team of 32 U.S. universities involved in the upgrades. “These upgrades will allow us to study the properties of the Higgs boson in much greater detail than we could do with any other facility,” Ryd said. “And there are many other mysteries in particle physics that the High-Luminosity LHC (HL-LHC) can hopefully shed some light on. For example, dark matter.” To put these upgrades into perspective: In 2017, the LHC produced approximately 3 million Higgs bosons. The upgraded HL-LHC will produce at least 15 million per year when it is up and running by the end of 2027. And it will provide more detailed information from the upgraded detector that will enable studies not currently possible. Planning for the upgrades began almost simultaneously with the launch of LHC operations in September 2008, with Ryd and other physicists compiling a wish list of potential improvements. They received a strong show of support in 2014 when the Particle Physics Project Prioritization Panel (P5), a federal scientific advisory group, declared these upgrades to be the highest priority for the U.S. particle physics program. The U.S. contributions to the CMS detector upgrade are supported jointly by the National Science Foundation (NSF) and the Department of Energy, with Cornell coordinating the NSF-supported portions. Cornell’s CMS team has spent five years working on formal design, development and preconstruction planning. In February, the NSF’s National Science Board officially approved the $77 million Major Research Equipment and Facility Construction grant, and the start of construction. “We have gone through a series of reviews, starting with conceptual and then preliminary and, just this fall, the final design review,” Ryd said. “And we have more specifically articulated the scope, cost and schedules for this project.” The Cornell team is involved in two of the four subareas of the NSF-supported upgrades. The largest task is the construction of the forward pixel detector. Nearly 20 U.S. university groups are involved in this part of the project. All their work will be integrated at Cornell and assembled into a functional detector, and Cornell will be responsible for building many of the mechanical and cooling components. In addition, Cornell is a leader in the construction of the track trigger. The NSF-supported project also involves electronic upgrades to the barrel calorimeter and the forward muon detectors. A separate Cornell team is participating in a $25 million project to develop computation software strong enough to process the surge of data from a HL-LHC. “I have actually been working and thinking about these upgrades since 2008,” Ryd said. “It’s really great to now reach the point where we get into a phase change. Instead of just designing and trying to defend what we want to build, we will actually move into building it. And that’s exciting.” Article originally appeared in the Cornell Chronicle.