A new animation about two innovative telescopes being developed at Cornell has just been released by the research group led by Michael Niemack, associate professor of physics and astronomy in the College of Arts and Sciences. The two-minute video explains how researchers are "measuring the oldest light in the universe with the highest telescopes on Earth." CCAT-prime is a 6-meter-aperture telescope being built at 18,400 feet above sea level in northern Chile’s Atacama Desert. It will map the sky at submillimeter and millimeter wavelengths, providing insights into cosmology by measuring the cosmic microwave background (radiation left over from the Big Bang) and into galaxy evolution. The Cornell-led international project is being directed by Terry Herter, professor of astronomy in the College of Arts and Sciences. 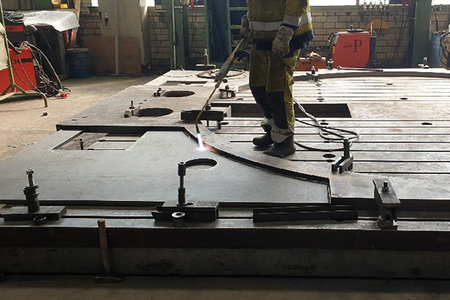 Welding the major telescope components that will be installed on top of the support cones shown above is well underway at Wessel GmbH. Photo by Vertex Antennentechnik/ GmbH
The Simons Observatory is building a similar 6-meter telescope and three smaller telescopes to measure the cosmic microwave background at a slightly lower elevation near CCAT-prime. Brian Keating, professor of physics at the University of California, San Diego, directs the project. Inspired in part by his father’s work as a documentary filmmaker, Niemack views videography and animation as effective outreach tools. “It’s a way to excite people about the unknown and the potential to understand and dream about our universe in new ways,” he said. 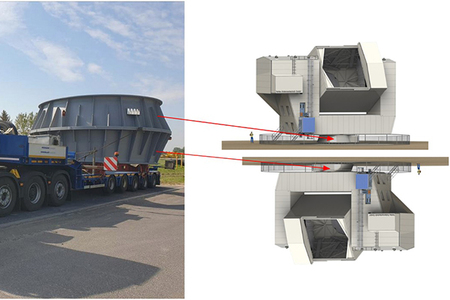 The CCAT-prime and Simons Observatory telescope support cones stacked on top of each other during transportation to Wessel GmbH, where the two telescopes are being assembled. Photo by Vertex Antennentechnik/GmbH
The video’s release also is intended to highlight ongoing fabrication of the two telescopes in Europe. The work is proceeding largely on schedule despite the pandemic, with both telescopes scheduled to be installed in Chile in 2021. This article originally appeared in the Cornell Chronicle.