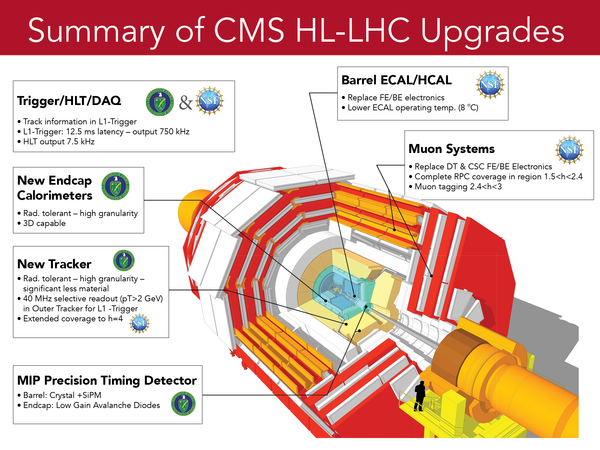 A breakdown of the work divided among NSF and DOE funded projects.
Upgrading a large scale project like the CMS detector for the High Luminosity-LHC is no small task. The hope and promise of discovery are dually met with the daily chores of meetings and reports. Years of research, planning, and presentations are needed, not only for the design of the actual upgrades, but for funding agencies to approve additional money for the next stage of the project. While arduous, these major milestone reviews are extremely helpful in providing feedback and are important steps to ensure the project is on track. In the U.S., the upgrades of the CMS detector are a joint project between the National Science Foundation (NSF) and Department of Energy (DOE). The NSF scope of the upgrades are coordinated at Cornell, where the DOE project is lead by Fermilab (V. O'Dell). Cornell University plays a major part in the design and construction of the forward pixel upgrades and the track trigger project. This NSF-funded portion also includes electronic upgrades to the barrel calorimeter and the forward muon detectors. In total, about 25 U.S. universities are involved in this upgrade, which adds another level of complexity in the coordination of the overall project. 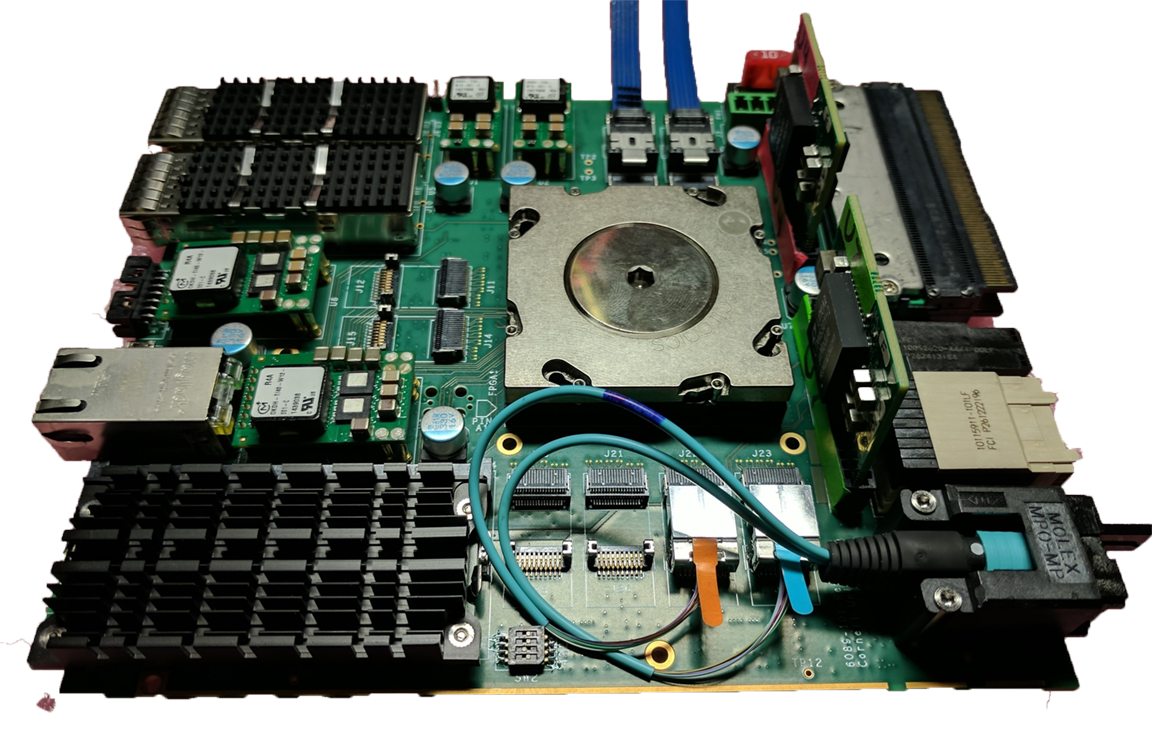 Track Trigger board developed here at CLASSE. Photo: Charlie Strohman
The $75M in funding that Cornell and collaborators are seeking from the NSF is a Major Research Equipment and Facility Construction (MREFC) grant, which will fund the construction phase of the project. (In addition to CMS, the ATLAS experiment is pursuing the same level of funding for a total investment from NSF of $150M for the upgrades of the HL-LHC detectors). This amount of funding, paired with the distribution of collaborators, mandates a tightly organized and recorded process that must be neatly delivered to the NSF. The approval process for an MREFC project is a multi-year process with three major stage-gate reviews: On Dec. 12-14, 2017 the NSF held the Preliminary Design Review (PDR) of the NSF scope for the CMS detector upgrade. The PDR is the most critical review in this multi-stage review process before the funding is approved and hence a major milestone in the preparations for the upgrades of the CMS experiment. This review looked at the project in three separate tracks, focusing on the technical status of project; cost, schedule, and risk; and management The preparation for this stage has taken years. A very focussed effort has been underway by a team of people at Cornell and many other U.S. universities to develop the project plans. At the heart of this is the development is a resource loaded schedule with detailed cost information and technical descriptions of the project requirements and interfaces. In further preparation for this review Cornell held a 'Director's Review' called by R. Patterson on Oct. 18-20, 2017 to preview the material and improve messaging to the NSF. The review was chaired by J. Yeck from U. of Wisconsin and D. Hartill served as on of the reviewers. This review was followed by an intense period of a few weeks to get all documentation and material updated and finalized before it was released to the PDR committee on Nov. 28. In total, the team has prepared thousands of pages of material for this review. After the multi-day meeting with the review committee, the team received very strong support for approval. The review report (51 pages!) strongly endorses the project plan and concludes that the project can be completed within the $75M TPC (Total Project Cost) and considers the PDR passed. This is very strong encouragement for the project as the NSF will now take the project to the National Science Board for approval. This meeting is targeted for July, 2018. Meanwhile, the team is also working with the NSF Large Facilities Office to perform a cost review of the project. As shown below, a large number of people at Cornell have worked hard to make this impressive project a possibility. Key people include: Project Office: Forward Pixel: Track Trigger: