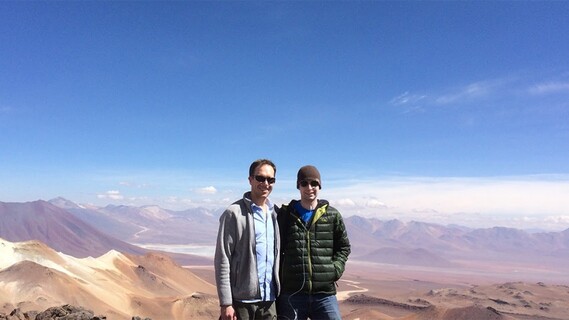 Mike Niemack, left, associate professor of physics and astronomy, and Nick Cothard on top of Cerro Chajnantor where the FYST will be built and the instrumentation that they received funding for will be installed.
The CCAT-prime telescope project – being developed by an international consortium of universities, led by Cornell – has been awarded $1.3 million by the National Science Foundation (NSF) to develop instrumentation that will measure galactic dust polarization and the oldest light in the universe. The principal investigator of the award is Michael Niemack, associate professor of physics and astronomy in the College of Arts and Sciences and CCAT-prime instrument scientist. Approximately half of the matching grant was provided by Cornell, as required for eligibility by the NSF grant competition, with additional funding contributed by Fred Young ’64, M.Eng. ’66, MBA ’66. This new funding allows researchers to develop the first 350 gigahertz instrumentation for the Fred Young Submillimeter Telescope, which the CCAT-prime project is building in the Atacama Desert of Northern Chile. The instrumentation will give scientists new tools to record the earliest signals from the universe, known as the Cosmic Microwave Background, or CMB. The CMB, which formed 380,000 years after the Big Bang, contains information about the exponential expansion of the universe a fraction of a second after the Big Bang. "The new 350 GHz instrumentation supported by the NSF will measure light that has a wavelength about a thirtieth of an inch long – thousands of times longer wavelength than the light we see with our eyes," Niemack said. "We aim to make the most sensitive measurements of polarized light from our galaxy as well as from the early universe at 350 GHz with this instrumentation. These measurements will inform how magnetic fields affect star formation in our galaxy and may help us understand the high energy physics of the early universe." The 350 GHz instrumentation will be part of the Prime-Cam instrument, which the CCAT-prime collaboration is building for dedicated use on the telescope. Prime-Cam will contain up to seven broadband and spectroscopic imaging instrument modules that cover frequencies ranging from 200 to 900 GHz. Each module will have between 3,000 and 10,000 spatial pixels and a field-of-view of 1.3 degrees. The CCAT-prime project is a collaborative effort of more than 40 institutions from around the world, led by Cornell; Terry Herter, professor of astronomy (A&S), is project director; Martha Haynes, Distinguished Professor of Arts and Sciences in Astronomy (A&S), serves as chair of the CCAT-prime board of directors. "We are thrilled to have support for building the first 350 GHz instrumentation for the CCAT-prime project," said Niemack, "and we are grateful to Fred Young and Cornell for helping to make this possible." For the original article, visit the Cornell Chronicle.