The performance of modern accelerators and their applications have been highly dependent on bright electron beams obtained from photoinjectors. These electron beams are generated by shining a laser on a special material (metal or semiconductor) releasing electrons into intense accelerating field. In order to meet requirements for modern accelerators, the beams from photocathodes need to be both highly collimated (or parallel) and be produced with a good quantum efficiency (defined as a number of emitted electrons per incident photon). For example, a perfectly collimated beam can in principle be focused down to extremely small spots or allow obtaining electron diffraction images with unprecedented resolution. Yet, the material properties of photocathodes tend to limit the degree of beam collimation or, as the physicists would say "limit the beam brightness". Therefore, improving the parallelness of the beam from photocathodes is an important goal pursued by a number of research groups worldwide. CLASSE researchers headed by Hyeri Lee (a PhD student working in Professor Ivan Bazarov's group) took a new approach to improve the parallelness of the beam by controlling which side of the photocathode is illuminated with light and which side emits photoelectrons (see Figure 2 below). Using special alkali antimonide photocathodes for this purpose, they were able to demonstrated that one can increase the brightness of the beam by shining the laser on the back of the photocathode (called the transmission mode) rather than the conventional approach, which uses the front illumination (reflection mode). Monte-Carlo simulations of photoelectrons were developed for both modes of operation and were used to explain the experimental data in detail. This result, which was published in Applied Physics Letters, provides an important insight into the mechanism of photoemission for generating high brightness beams from the photocathodes. This research opens up many new possibilities for modern accelerators and their applications. For example, the transmission photocathode allows much smaller beams to be created by photoemission because the final focusing lens can be placed right at the surface of the photocathode (which is not possible with the conventional front illumination). It makes these photocathodes highly appealing to applications like ultrafast electron diffraction (UED) or ultrafast electron microscopy, which require both small beams and high degree of parallelness in order to achieve a record spatial resolution. 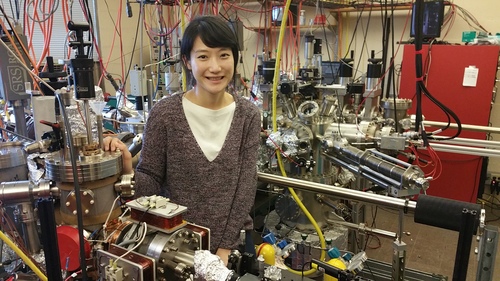