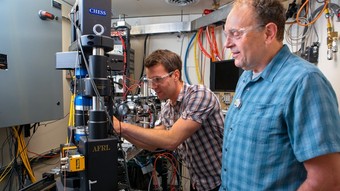 Matthew Miller, right, associate director of the Cornell High Energy Synchrotron Source (CHESS), watches graduate student Mark Obstalecki prepare a sample for analysis in the F2 hutch at CHESS.
For the past 10 years, the U.S. Air Force has funded research on high-performance materials at the Cornell High Energy Synchrotron Source (CHESS). The partnership has resulted in numerous advances, including a greater understanding of metal fatigue and analysis of the best metals for aircraft. This partnership was extended with $8 million in funding to CHESS as part of the fiscal year 2019 defense appropriations bill, a $674.4 billion package that President Donald Trump signed into law Oct. 1. The bill passed both the U.S. Senate - supported by New York Sens. Charles Schumer, who is Senate minority leader, and Kirsten Gillibrand - and the U.S. House of Representatives late last month. "Cornell University is deeply grateful to Leader Schumer and Senator Gillibrand for securing $8 million in additional funding for CHESS," Cornell President Martha E. Pollack said in a statement. "Maintaining our scientific infrastructure is essential if the U.S. is to keep its competitive advantage in research and development. Over the years, taxpayers have invested more than $1 billion in CHESS, an investment that's paid off many times over in new discoveries, breakthrough technologies, [science, technology, engineering, math] education and workforce development." "[CHESS] plays an incredibly important role for both the U.S. Air Force and the entire scientific community, so it is critical we continue to invest in its success," said Schumer. "Through their exceedingly successful partnership with the Air Force, the CHESS lab has developed better materials for our aircraft, ensuring that they are sturdier and perform at a higher level." Joel Brock, director of CHESS, said the partnership with the Air Force Research Lab (AFRL) has been involved with InSitµ@CHESS, a program led by Matt Miller, professor of mechanical and aerospace engineering and CHESS associate director. InSitµ provides user support for structural materials with a scientific and engineering staff dedicated to providing state-of-the-art specimen handling, instrumentation for high-energy X-ray beams, data collection software, and computational tools for analysis, visualization and interpretation. Researchers work side by side with InSitµ personnel to use the capabilities at CHESS to understand problems like residual stresses created during manufacturing and welding and the microscopic origins of fatigue cracks. Miller said this new funding will help that work continue. "The new Air Force initiative builds directly on the success of the InSitµ center and the long successful collaboration with AFRL," he said. "The timing is perfect; CHESS is undergoing an intense upgrade, and the $8 million will fund the operation of two new unique beamlines." One beamline will expand work previously done on structural metals, extending the application from materials properties to understanding materials processing operations such as 3D printing. The second beamline will focus on the properties and processing of soft, functional materials for applications including soft robotics and sensors. "As with InSitµ," Miller said, "the ultimate goal of the two new Air Force beamlines will be to bring industry to the beamline and enable the use of one of the world's best characterization capabilities on our nation's most important materials challenges." CHESS, which attracts more than 1,200 users from around the world annually, is in the final stages of a major upgrade. The facility has been shut down since early June for the upgrade, which is expected to be complete in early 2019. In addition to the upgrade ... known as CHESS-U ... the facility next spring will transition to a new funding model, in which the National Science Foundation (NSF) will no longer be the sole steward. The AFRL is one of several expected funding partners; Cornell is also proposing to operate, for the NSF, a subfacility called CHEXS (Center for High-Energy X-ray Science) at CHESS. That proposal is still under review. The original version of this article appeared on The Cornell Chronicle.