The White House has recognized Thomas Hartman, assistant professor of physics at Cornell, with the prestigious 2019 Presidential Early Career Award for Scientists and Engineers (PECASE). The awards were announced July 2. 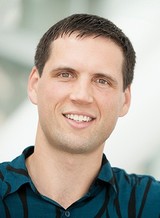 Thomas Hartman
Hartman was awarded through the U.S. Department of Energy for his work in reconciling quantum mechanics and relativity by examining "emergent gravity." He is developing new ways to analyze quantum theories, which can be applied to the dynamics of black holes and other gravitating systems. This research could lead to significant steps toward resolving questions in quantum gravity - including string theory, the connection between gravity and thermodynamics, and Stephen Hawking's black hole information paradox. The award is the highest honor bestowed by the federal government to scientific and engineering professionals who are in the first stages of their independent research careers and who show exceptional promise for leadership. Established 23 years ago during President Bill Clinton's administration, the awards acknowledge the advancement of science, technology, engineering and mathematics (STEM) education; and community service, as demonstrated by scientific leadership, public education and outreach. The White House Office of Science and Technology Policy coordinates the PECASE with participating federal departments and agencies. Other Cornell award recipients include Jenny Kao-Kniffin, Kin Fai Mak and Rebecca Slayton. This article originally appeared in the Cornell Chronicle: http://news.cornell.edu/stories/2019/07/four-cornell-faculty-win-white-house-early-career-awards