Kite Hill Collapse at Cornell: 7 years later, the repair is near completion

By Nahla Minges | October 24, 2018 On March 13, 2011, Wilson Lab Facilities Manager Richard Gallagher awoke to an emergency phone call. Kite Hill, the 300 ft. long patch of trees and gravel behind Wilson Lab, had collapsed. The Lab's power supply, which ran underneath the road adjacent to the landslide, was now at risk of irreparable damage. After extensive testing, planning, and coordination with the City of Ithaca, the Town of Ithaca, and Cornell University, the restoration of the hill has commenced and the project is finally nearing completion. 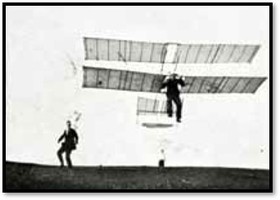 1909 - Cornell Aero Club testing gliders
In years prior to the collapse, the Hill was a dumping ground for ice from Lynah Rink, road snow, and ground soil from miscellaneous Cornell projects. Because of easy access for dumping, and lack of apparent harm, these practices continued without consequence. However, due to the instability of the discarded components, the Hill gave way and collapsed in 2011, after an accumulation of heavy snow thawed. 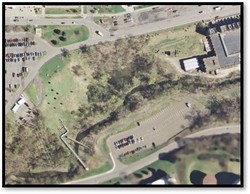 Arial view of Kite Hill - prior to collapse 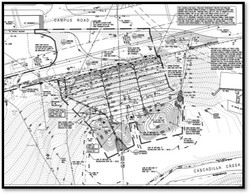 Construction Drawing for Kite Hill - The center line illustrates the boundary line between the City of Ithaca (left) and the Town of Ithaca (right), introducing further obstacles to the restoration of the Hill.
The Recovery Timeline From 2011- 2013: Campus Drive was rerouted, ground stabilization tests were employed, and designs for the slope repair and stabilization were created. Quotes for the reconstruction ranged between $1-1.6 million, greatly exceeding anticipated budget and resulting in project postponement. From 2015-2017: A new investigation was conducted, a revised plan distributed, and the start of project was announced (and then postponed twice). In 2017, when project coordinators were ready to begin, Wilson Lab administrators urged for the wait of repair, until June of 2018, when the Cornell High Energy Synchrotron Source Upgrade Project (CHESS-U) would commence. Why Wilson Lab Demanded Postponement Weather, traffic, machines, and sounds produce vibrations, which affect both x-ray beam stability and storage ring stability. The repair of the Hill entailed large equipment and trucks rolling past Wilson Lab. Even though the synchrotron is underground, these vibrations from the repair would significantly affect the entire facility. 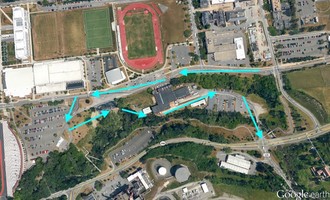 One-way truck route for Kite Hill repair (Wilson Lab center)
Less than 50% of proposed research at Wilson Lab's CHESS can be awarded for beamtime, due to the high demand of use of the facility. Between the large demand for beamtime, CHESS users traveling internationally, 24/7 operations, and radiation safety concerns, it was imperative to postpone the Kite Hill project until CHESS was not operating. The CHESS Upgrade (CHESS-U) promised perfect timing for the Hill repair work to commence simultaneously, in June 2018. The synchrotron began a scheduled "down" for a period of 8-months, in which $15 million in renovations are being made to CHESS; enabling CHESS to be the premier synchrotron source in the United States for high-energy, high-flux x-ray studies. During the scheduled down, several things happened which enabled the Hill project to proceed more safely: The Wilson Lab parking lot reopened on October 24, and the down will end in February 2019. Kite Hill Today Tammi Aiken, the Kite Hill project engineer, stated, "The contractor [Klepper, Hahn & Hyatt] has substantially completed the slope stabilization aspect of the project and will be doing some minor work at the toe of the slope and pulling up pavement protections and fencing on the east side in the next week or two. They will also be repairing any rutting at the slope caused by some recent rain events. I'm working with the contractor and the administration to determine the schedule for the site work and rehabilitation at the top of the slope but in the meantime the contractor has maintained and installed drainage facilities to ensure storm runoff is routed to existing catch basins and not to the slope."

October 2018 Kite Hill - view from west of Kite Hill (Wilson Lab in the background) photos: Andrew Noyes
Many people are pleased with the completed work of the Kite Hill project and are looking forward to having this part of the Cornell campus fully restored.