In the Large Hadron Collider (LHC), an underground 27-kilometer tube beneath the Swiss and French countryside, Cornell physicists smash matter into its component parts to learn about elementary particles and their interactions. A $3.8 million grant from the National Science Foundation will support the team for three more years of research. "We’re the ultimate reductionists," said Peter Wittich, professor of physics in the College of Arts and Sciences (A&S) and director of the Laboratory of Elementary Particle Physics. "What we do at LHC is to pull everything apart into the most fundamental pieces." 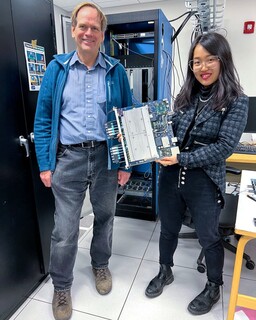 Postdoctoral researcher Rui Zou (right) is supported by a new NSF grant to Cornell researchers working on the Large Hadron Collider (LHC). With CLASSE engineer Charlie Strohman, she is working on the Apollo ATCA card, a device for the trigger track project that is part of Cornell-based upgrades to LHC’s Compact Muon Solenoid detector.
Cornell researchers contributed to the 2012 discovery at LHC of the Higgs Boson particle, the last piece of the Standard Model of physics. The data collection run that included this landmark discovery has concluded. On July 5, the next four-year run at LHC’s Compact Muon Solenoid (CMS) detector began, Wittich said, with a new goal: to find evidence of physics beyond the Standard Model. "The Higgs Boson completes the Standard Model; it describes all the particle interactions we know. But it’s also incomplete," said Wittich, one of five co-principal investigators receiving the grant. The Standard Model holds, for example, that there are equal amounts of matter and anti-matter; however, no one knows where the anti-matter is in the universe. In another puzzle, cosmological observations confirm the existence of something called dark matter, which is not captured in the Standard Model. A major goal of the next data-taking period after the upgrade is to find new forces or new particles that will be able to resolve these inconsistencies, Wittich said. For example, future LHC collisions could help Ritchie Patterson, the Helen T. Edwards Professor of Physics (A&S) and director of the Center for Bright Beams at Cornell, search for one particular type of new particle. Patterson is interested in a subset of new, unfamiliar particles predicted by models developed to complete the Standard Model. If they exist, these proposed particles would travel a short distance from the collision point before disintegrating into a clump of other particles – ones that are already part of the Standard Model and therefore familiar, she said. "Our LHC detector wouldn’t necessarily see the new particles directly, but it can detect the clump of particles that they produce," Patterson said. "Such a clump would be unambiguous evidence for a new particle of this type, and therefore of phenomena beyond the Standard Model, and would be huge." Patterson is working with a postdoctoral researcher, two doctoral students and two summer undergraduate researchers. One graduate student is at LHC’s host lab CERN in Switzerland, helping to start the new data run, while the rest of the team works from Ithaca. She said that if new phenomena occur, she and her team have a great chance of finding them. In all, eight doctoral students, four postdoctoral researchers and several undergraduate students receive support from the NSF grant. In addition to Patterson and Wittich, co-principal investigators at LHC are Cornell physics professors Jim Alexander, Julia Thom-Levy and Anders Ryd (A&S). Ryd is also leading a coinciding upgrade project funded by a separate NSF facilities grant awarded in 2020. The $153 million grant, to Cornell and Columbia University, is for the construction of high luminosity upgrades to two particle detectors at LHC. Cornell is responsible for upgrades that will enable CMS to operate at higher intensity, including upgraded proton beams, more sophisticated detectors and new trigger systems for smarter data collection. Most of the upgraded equipment is being prepared in Ithaca, to be shipped to Geneva to install beginning in 2026. Data collection with these upgraded detectors is expected to begin in 2029 and continue for 10 years. This will generate enormous amounts of data, Wittich said, more than 10 times the total collected by LHC through 2025. "We’re simultaneously collecting data and, to get ready for the future, also building an upgrade to the experiment to improve it", Wittich said.

Originally posted in the Cornell Chronicle.