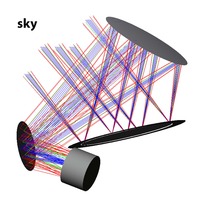 Ray trace showing three mirrors and cylindrical receiver for one of the new telescope designs.
Professor Michael Niemack has developed new designs for a large aperture (~6 meter) telescope that can map the cosmic microwave background (CMB) 10x faster than upcoming observatories. The designs were recently published in Applied Optics and are also available on the arXiv. This research is motivated by the goals of studying inflation in the first fraction of a second after the big bang, precisely measuring the mass and number of neutrinos, constraining the dark energy equation of state, and probing other cosmological observables. To pursue this exciting science new telescopes and instruments are needed with much higher throughput than any existing observatories. The telescope designs presented in this paper can illuminate > 100,000 detectors, which is roughly 10x more than any current telescopes, and are a promising approach for a next generation "Stage IV" CMB observatory.