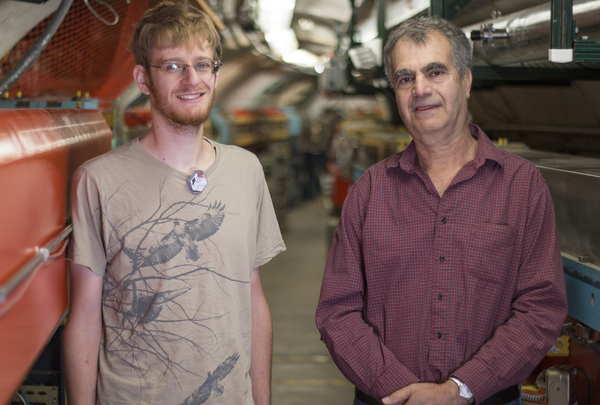 Graduate student Will Bergan, left, and Principal Investigator David Rubin aim to bring Optical Stochastic Cooling to CESR
Bunches of particles circulate around the Cornell Electron Storage Ring (CESR) at nearly the speed of light. Each one centimeter-long bunch consists of some billions of particles. In a blink of an eye the bunch of particles has traveled around the 768m circumference ring nearly 1,000,000 times. The particles in the bunch emit photons as they speed around the ring. The photon emission heats up the particles in the bunch, where the hot particles expand and spread out. An otherwise bright beam is made dimmer, compromising its effectiveness as a tool for research David Rubin and the CESR accelerator group at CLASSE have just been awarded an NSF grant to test an idea invented by Cornell physicist Alexander Mikhailichenko in collaboration with Evgeni Bessonov (Lebedev Institute, Moscow) to actively cool bunches of high energy electrons circulating in CESR. The idea is to deploy a stochastic cooling system with feedback that operates at optical wavelengths. Stochastic cooling was invented at CERN in the 1970s by Simon van der Meer, and implemented with feedback operating at microwave wavelengths to cool very long bunches of antiprotons. Collisions of the cold antiprotons with a proton beam led to the discovery of the W and Z bosons, for which Van der Meer and Carlo Rubbia shared the Nobel prize in 1984. But no one has ever attempted stochastic cooling of an electron beam. Cooling an electron beam is much more challenging for two reasons. Electrons are much lighter than anti-protons and heat up with the emission of synchrotron radiation photons, and electron bunches are much shorter, a centimeter rather than meters. Nevertheless, Rubin and his team aim to demonstrate stochastic cooling of an electron beam at the storage ring under the Cornell campus. Stochastic cooling of anti-protons proceeds in two steps. First, the several meters long bunch of particles is divided into shorter, centimeter length packets. A feedback system measures and then corrects the displacement error of the packet, incrementally reducing the width and temperature of the bunch. In the subsequent journey of the bunch around the ring and back to the feedback pickup, the particles in each packet mix with their neighbors. And then the process is repeated. After several hundred thousand passages around the ring and through the feedback loop, the temperature of the bunch is measurably reduced. A single passage through the feedback loop and around the ring takes 2.5 millionths of a second. The bunch is cooled in a second. 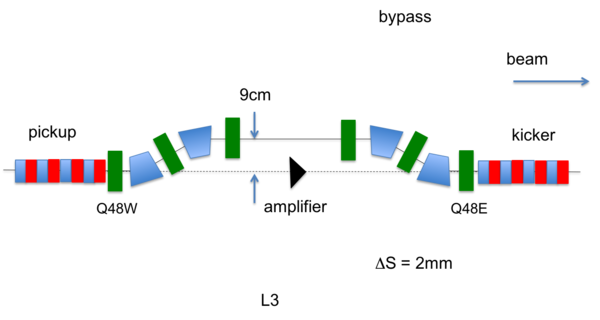 Schematic showing the main components of Optical Stochastic Cooling
The experiment can be realized in CESR thanks to the remarkable flexibility of the Cornell machine. The lattice (beam focusing, bending and steering), can be configured to incorporate a cooling channel and delay bypass, and the storage ring can be operated at a very low energy to enhance the sensitivity. "Indeed in many respects CESR is uniquely equipped for this kind of experiment. And at least as important as the accelerator infrastructure, is the extraordinary team of accelerator physicists and engineers who work at CLASSE" Says Rubin, the principal investigator for the project. Optical stochastic cooling is based on the same principle as conventional stochastic cooling. The difference is the technology of the pickup that is used to measure the position of the packet, and the kicker that corrects the position error. Stochastic cooling systems that have been implemented for anti-protons use microwaves to measure and correct packets. Optical stochastic cooling will use infra-red light. The light is generated as the packet passes through the gap of an undulator magnet (the pickup). The light is amplified and then recombined with the packet in a second undulator (the kicker) that will correct the packet position error.

Click image to watch movie of each pass cooling the bunch further and further. In this perfect scenario, the transverse energy becomes zero. Purple dots indicate center of mass for each packet within each bunch
The cooling rate scales with the number of packets into which the bunch can be subdivided. The more the packets, the faster the bunch will be cooled. The length of the packets depends on the wavelength of the feedback system. The wavelength of microwaves is about one centimeter. The wavelength of infra-red light is 10,000 times smaller. Cooling time with microwaves is measured in hours. Cooling time with infra-red light is a few seconds. The team will begin by developing the theory and creating a computer model to simulate the cooling mechanism. A critical component of the optical feedback is the delay bypass beam line, where the electron beam travels through on its way from the pickup undulator to the kicker undulator. The infra-red light emitted in the pickup undulator is amplified before it meets up with the electrons in the kicker undulator. The bypass allows the team to delay the electron beam by a few trillionths of a second so the light has time to catch up. Much of the design and simulation work will be performed by graduate students including Will Bergan working with the CESR operations group. The bypass beam line will be installed in the 18-meter-long straight section of CESR in L3, the area where the tunnel falls under Tower Road on campus. This section of CESR is currently instrumented with electron cloud diagnostics, and devoted to the CESR-Test Accelerator experiments. The bypass will be designed with zero impact on operation of the storage ring as x-ray source for CHESS. This section of CESR, and CESR overall, is flexible enough to accommodate this kind of academic research and testing of potentially transformative technology, all while being uniquely accessible to students. "We make every effort to preserve this flexibility so that CESR will continue to be a laboratory for beam physics even as it is reconfigured as CHESS-U, a world class x-ray source." Says Rubin. In the future, depending on the outcome of the experiments at Cornell, optical stochastic cooling may be implemented to enhance the luminosity of particle colliders like the LHC or a muon collider. If the method can be made to work with the even shorter wavelengths characteristic of ultra-violet light, it will be used to increase the intensity of x-ray sources like CHESS at Wilson Lab.