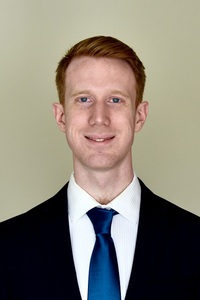 David Sweigart
Drawn to physics by his desire to understand how things work, postdoctoral researcher David Sweigart of Cornell University now helps test the most fundamental theory of the construction of the universe — the Standard Model of particle physics. For his Ph.D. dissertation, Sweigart analyzed the first year of data from Fermilab’s Muon g-2 experiment, collected in 2018. His thesis, "A measurement of the anomalous precession frequency of the positive muon," has won the 2020 Universities Research Association Thesis Award, an annual recognition of the most outstanding work for a thesis conducted at or in collaboration with Fermilab. "David’s thesis covers the theoretical motivation for Fermilab’s Muon g-2 experiment and then describes his technical work so we all can understand the reliability of the measurements," said Chris Stoughton, Fermilab scientist and URA Thesis Award Committee chair. The muon is a heavy cousin of the electron, and its mass and lifespan allow researchers to observe its properties very precisely. By studying the muon’s magnetic moment — which tells us the strength and orientation of its internal magnetic field — the Muon g-2 experiment focuses on a potential discrepancy between theory and experiment that may shed light on gaps in the Standard Model. Previous experiments, most recently at Brookhaven National Laboratory, have found that, when shot through a uniform magnetic field around a particle storage ring, muons seem to spin in a way that differs slightly from the Standard Model’s predictions, which could result from interactions with yet undiscovered particles. With ultraprecise measurements of the muon’s "spin precession frequency," Fermilab’s Muon g-2 experiment aims to reduce the Brookhaven experiment’s uncertainty range by a factor of four. When combined with an equally precise average value for the strength of the magnetic field in the ring, measuring the precession frequency will help pin down the muon’s anomalous magnetic moment — and determine whether the disagreement between the measured value and the theory’s prediction is significant enough to warrant a revision of the Standard Model. On the other hand, a confirmation of the Standard Model on this scale would be groundbreaking in itself. "It will be exciting either way. Even if we found that we were consistent with the Standard Model’s prediction, our result would have a significant impact because it would place a tight constraint on current and future models for new physics," Sweigart said. "URA is very pleased to recognize David’s outstanding and creative work. His curiosity and drive have enabled him to break new ground in muon science and make significant contributions to his field and to Fermilab," said URA Executive Director Marta Cehelsky. "He has a promising career ahead and his work will no doubt continue to impact high-energy physics for years to come." Sweigart’s 300-page thesis analyzes the first year of measurements since the experiment started collecting data at Fermilab in 2018. It also provides a detailed description of the program’s background, methods, challenges and uncertainties. The thesis highlights Sweigart’s contributions to each stage of the experiment. In the construction phase, he worked on hardware that provided the heart of the experiment, allowing researchers to detect particles given off by the muons as they decay. He then developed software to handle serious issues, including the "pileup" that results when these particles arrived at the detector back-to-back too quickly. Finally, he and his team provided one of the experiment’s six independent analyses of the precession frequency of the muon, which was further validated by Sweigart’s rigorous examination of each potential source of systematic bias. A few key values are shielded from researchers to prevent them from unconsciously biasing the measurements, so Sweigart and his colleagues remain blind to the results of the experiment for now. Once the precession frequency and magnetic field measurements are cross-checked to a confident consensus, the concealed values and magnetic moment will be revealed at a future "unblinding ceremony," and Sweigart’s exhaustive thesis will serve as a roadmap to explain and justify the findings. "There’s just so much in David’s dissertation," said James Mott, Wilson fellow at Fermilab and Boston University adjunct assistant professor. "I’ve lost count of the times David has answered a question with ‘I have a plot of that in my thesis.’" The original article, written by Zack Savitsky, appeared first on Fermilab's website.