Hasan Padamsee, the Cornell adjunct professor and group leader of Cornell's SRF group for decades (now leading the technical devision of FNAL) has received the 2015 Robert R. Wilson Prize for Achievement in the Physics of Particle Accelerators. His citation reads: "For his leadership and pioneering world-renowned research in superconducting radio-frequency physics, material science, and technology, which contributed to remarkable advances in the capability of particle accelerators." Hasan Padamsee is recognized as one of the world's top experts on SRF. He has worked in this field for nearly 4 decades and has made contributions to nearly all its breakthroughs. His influence has been magnified by his students at Cornell and by his collaborators. SRF technology has strongly increased in importance for the field of high-energy accelerators, and an impressive share of the credit for this success story goes to Hasan. It is safe to say that likely, without his contributions, SRF technology would not be ready today for the most modern accelerators that are under construction and development: PIP-II, LCLS-II, ESS, and the European XFEL. It is fitting that Robert R. Wilson, second director of Cornell's high-energy physics lab, was also at Cornell for decades before becoming the founding director of FNAL.

Technicians move the vacuum vessel into place at the end of its cross-campus trek.
On Monday, September 22, a large red pipe moved across the Cornell campus -- to become the outer vessel of a future particle accelerator. The device is the outcome of a 10-year NSF-funded R&D program to develop a new generation of accelerators that is far more energy efficient than before. Inspired by the possibility of producing high power X-rays for scientific research using Energy-Recovery Linear Accelerator technology, it can also be used for a wider range of other accelerators, including other types X-ray source, particle colliders studying the gluons that bind atomic nuclei, and even nuclear reactors, where such accelerators could improve safety. At the heart of the new accelerator are superconducting cavities, which transfer energy to the particle beam with unparalleled efficiency. The improvement in performance comes from superior preparation of the interior surfaces of the cavities, minimizing surface resistance. All were built on the Cornell campus, and their performance, tested individually before assembly, surpassed expectations. The construction of this major device has taken more than 2 years and has involved dozens of scientists, engineers and technicians from the Cornell Laboratory for Accelerator-based Sciences and Education (CLASSE). The final assembly of the accelerator in the coming weeks will involve sliding the accelerating cavities into the red vessel. Once complete, this will be the most efficient, full-scale accelerator module in the world. Cornell's work on energy efficient particle acceleration and the construction of the new prototype accelerator has been led by Professors Georg Hoffstaetter and Matthias Liepe, and Visiting Professor and project manager Ralf Eichhorn. 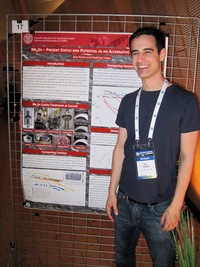 Sam Posen at International Linear Accelerator Conference 2014 in Geneva, Switzerland.
We are pleased to announce that Sam Posen was awarded 1st Prize at the Student Poster Session at the International Linear Accelerator Conference 2014 in Geneva, Switzerland. His poster presents his work on Home/NewsAndEvents.Nb3Sn as an alternative superconductor with great potential for accelerating cavity applications. It offers large potential gains in quality factor and accelerating compared to niobium, making it very promising for both high duty factor and high energy accelerators. Sam has designed and built an apparatus to coat cavities with Nb3Sn, and he developed a new coating recipe. This work has produced the first alternative material accelerator cavity to far outperform niobium at useful temperatures and gradients. Sam plans to defend his Home/NewsAndEvents.PhD in December. His advisor is Matthias Liepe.

Cornell has successfully completed RF testing of the first LCLSII 9-cell cavity in a realistic cryomodule configuration. This first cryomodule test of an LCLSII cavity is a very important milestone for the LCLSII project. The Cornell team demonstrated for the first time that the important LCLSII cavity intrinsic quality factor (Q0) specification can be achieved in a cryomodule configuration, and has set a new record for the efficient operation of an SRF cavity in a cryomodule. The cavity (TB9ACC012) was etched, N-doped and tank welded by the Fermilab team, and then was sent to Cornell for final cleaning (HPR), mounting, and installation into the Cornell Horizontal-Test-Cryomodule (HTC). After fast cool-down from 100K to operating temperature with large temperature gradients over the cavity during cool-down, the intrinsic quality factor Q0 at 2K, 14 MV/m was (3.2+-0.3)E10, thus significantly exceeding LCLSII specifications of 2.7E10. Detailed cool-down studies with the cavity in the HTC showed that large spatial temperature gradients over the cavity during cool-down (rather than large temporal gradients) are critical to reduce trapping of ambient magnetic field in the cavity walls. 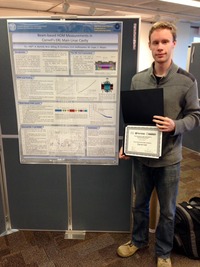 Daniel Hall at 2014 International HOM Workshop at Fermilab.
We are pleased to announce that Cornell graduate student Daniel Hall has been awarded the best student poster prize at the 2014 International Workshop on High Order Modes held at Fermilab. Daniel's poster on beam-based measurements of Cornell's ERL 7-cell cavity show both that the High Order Mode (HOM) loads are capable of sustaining the operation at 100 mA in an Energy Recovery Linac and that the HOMs present in the prototype cavity are highly unlikely to cause beam breakup via ERL-loop feedback. These measurements are critical in qualifying the cavity for use in the the proposed Cornell Energy Recovery Linac, which must be capable of operating with a continuous beam current of 100 mA at 2 picoseconds of beam bunch length. The results presented at the workshop held at Fermilab demonstrate that the construction of such a machine is now immediately achievable thanks to the research and development efforts at Cornell. Daniel Hall is nearing the end of his 2nd year of PhD studies with the SRF group. His advisor is Matthias Liepe. 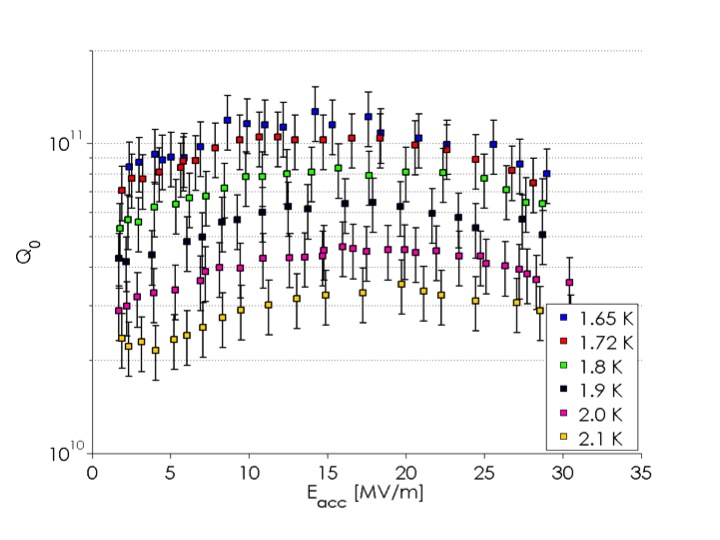 The Cornell SRF team recently has fabricated, prepared and tested a 1.3 GHz single cell SRF cavity, which reached record high intrinsic quality factors Q0 at high accelerating fields. To reduce wall losses by the RF fields inside the cavity, the niobium surface layer of the cavity was doped with nitrogen, a procedure originally developed by researchers at FNAL. In a cavity performance test conducted by graduate student Dan Gonnella, the Cornell cavity reached 2K quality factors of 3.5x1010 at a very high accelerating field of 30 MV/m. At 1.8K and 30 MV/m, the quality factor climbed above 6x1010. No other SRF cavity before has reached such high cryogenic efficiency at high accelerating fields in the 30 MV/m range. The cavity was prepared and tested as part of Cornell's ongoing LCLS_II high Q0 program, which is led by Prof. Liepe. SRF cavities with high intrinsic quality factors at medium to high fields are of critical importance for future SRF driven linear accelerators. These SRF linacs will operate in continuous mode, and become only feasible with highly efficient (i.e. high Q0) SRF cavities. Dan Gonnella is in his third year of PhD studies in the SRF group. His advisor is Matthias Liepe. 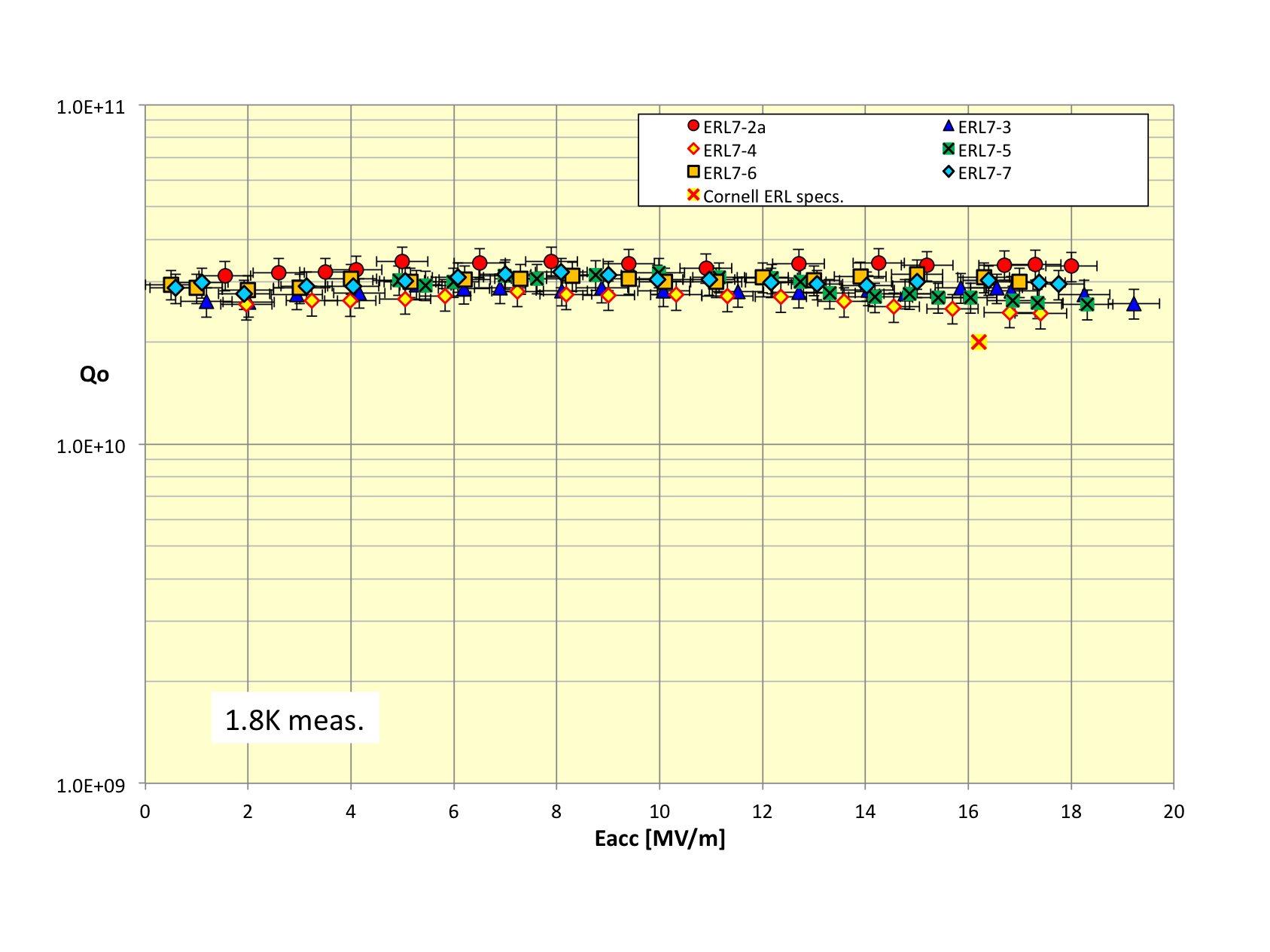 The Cornell ERL 7-cell cavities for the Main Linac Cryomodule (MLC), six 7-cells in total — have been fabricated, processed, and tested in the Cornell Laboratory for Accelerator-based Sciences and Education (CLASSE) vertical test pit. All have surpassed the specification values (Eacc=16.2MV/m with Q0 of 2.0e10 at 1.8K). In fact, the achieved Q0 during VT were much higher than specs, the average of Q0 is almost 3e10 at 1.8K. Through these 7-cell VTs, we have successfully demonstrated our high reliability in fabrication, high reproducibility of processes, and high yield of the results. The performance was achieved with a 100 % yield and needed no reprocessing. This is an important milestone for all future accelerators with high-Q0 cavities.