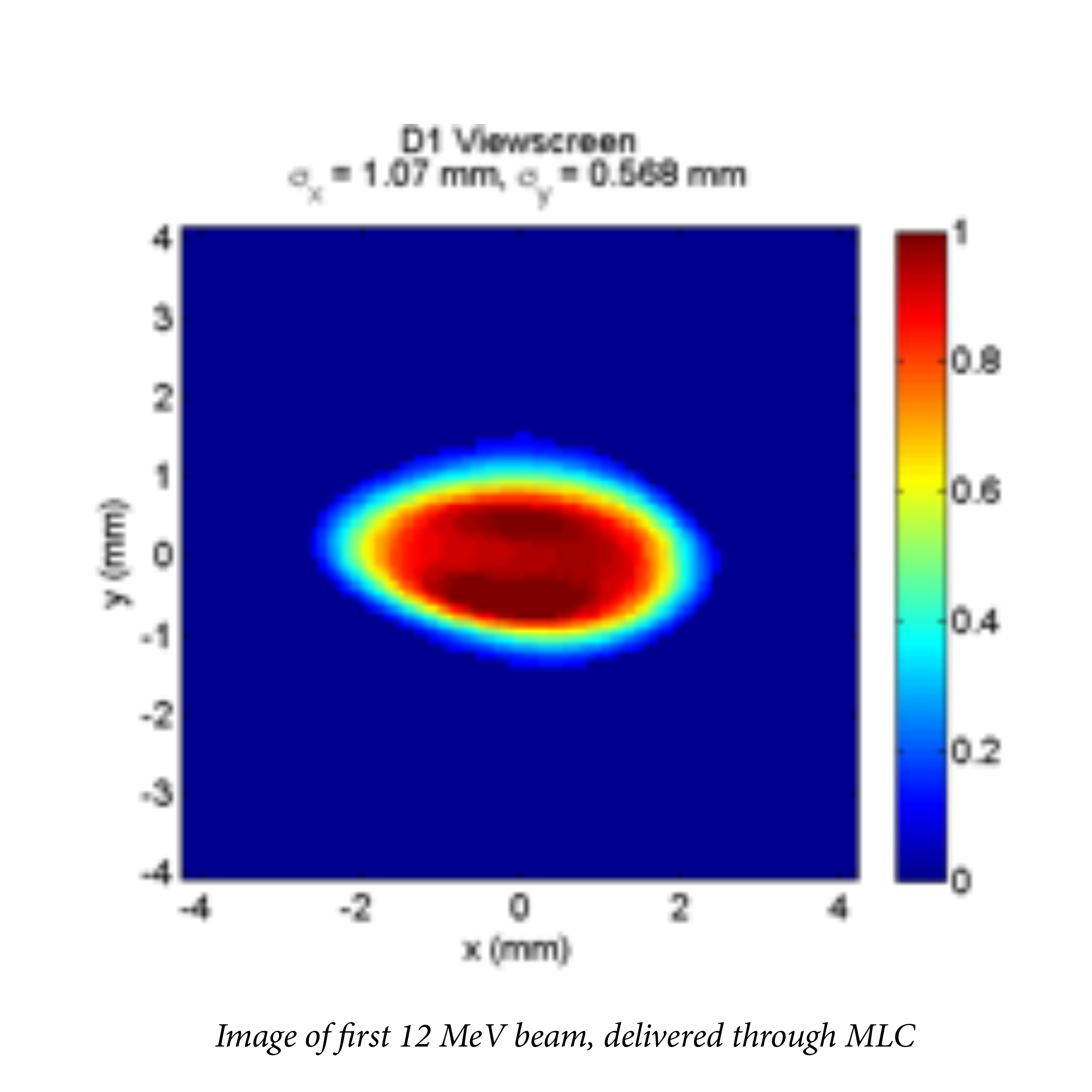 On May 15th, the CBETA project reached its first major funding milestone, "Beam through the MLC." For this test, the team had to successfully pass a beam through the Main Linac Cryomodule (MLC) and therein accelerate the beam to a final energy of 12 MeV. The MLC itself is a giant cryomodule, housing 6 superconducting acceleration cavities. It is the culmination of many years of record-setting research and engineering by the Cornell SRF group, and is also the first real demonstration of this level of performance, built in a way that is compatible with mass production Though many tests of the MLC have been performed prior to this, this milestone is both the first test of the MLC with an electron beam, and also the first test of the system's ability to regulate and stabilize that beam's acceleration. Importantly for the CBETA project, it is also our first required test to guarantee the next round of funding from NYSERDA. This test has been completed more than 3 months ahead of schedule, and was only possible because of the hard work of many CBETA/CLASSE employees, many of whom had to juggle multiple commitments from other efforts around the lab. Of course, this doesn't mean that our work for the summer is finished--this is just the first of many tests that need to be completed, and that work is ongoing.

The Cornell-BNL FFAG-ERL Test Accelerator: White Paper, arXiv:1504.00588 Cornell University has prototyped technology essential for any high-brightness electron ERL. This includes a DC gun and an SRF injector Linac with world-record current and normalized brightness in a bunch train, a high-current CW cryomodule for 70 MeV energy gain, a high-power beam stop, and several diagnostics tools for high-current and high-brightness beams, e.g. a beamline for measuring 6-D phase-space densities, a fast wire scanner for beam profiles, and beam loos diagnostics. All these are now available to equip a one-cryomodule ERL, and laboratory space has been cleared out and is radiation shielded to install this ERL at Cornell. Brookhaven National Laboratory (BNL) has designed a multi-turn ERL for eRHIC where beam is transported 22 times around the RHIC tunnel. The number of transport lines is minimized by using two non-scaling FFAG arcs. A collaboration between BNL and Cornell has been formed to investigate the new NS-FFAG optics of this design, built with permanent magnets, and to commission the unprecedented multi-turn ERL operation. This collaboration plans to install a NS-FFAG return loop and the associated optics-matching sections at Cornell's one-cryomodule ERL. This FFAG-ERL will be installed in several stages, each of which investigates crutial parts of this new design.

February 15, 2012 The goal of the Energy Recovery Linac (ERL) project at Cornell is to create a new type of continuous-duty x-ray source, and to do so requires making ultra-low emittance electron bunches and accelerating and recovering their energy in a superconducting linear accelerator. Three of the biggest R&D challenges are to prove it possible to build an electron injector with (1) sufficient current, (2) sufficiently small emittances, and a superconducting linac with (3) sufficiently small energy consumption. The NSF-funded prototyping project has already achieved three important milestones and the upper levels of some performance specifications are being extended on a daily basis! See more: ERL Project Goals

Associate Director of Cornell High Energy Synchrotron Source, Don Bilderback, details Cornell's proposal to build a half-billion dollar X-ray machine. What is an Energy Recovery Linac X-ray Machine? It will be a much brighter source of x-rays for the future than any present day x-ray source. It will be the world's most advanced x-ray machine for decades to come. The National Science Foundation has sponsored Cornell's existing synchrotron x-ray facility under upper Alumni field on the Cornell campus. It has been used for many years as a high intensity x-ray source to study the structure of matter down to the atomic scale. This is important for physics, biology, medicine, chemistry and materials science, and lets us do things that are not possible with more conventional x-ray equipment. Scientist from Cornell and across the world bring their scientific projects to our synchrotron laboratory to shine our intense synchrotron x-rays onto their samples. They want to examine how the atoms are arranged in their specimens. Ultimately this leads to a better understanding of how matter functions. See more information: http://news.chess.cornell.edu/articles/2009/WHCUInterview.html Listen to WHCU Morning Newswatch Podcast: http://whcu870.com/topic/play_window.php?audioType=Episode&audioId=4040243 WHCU Morning Newswatch Podcast (MP3)*
does not work with Internet Explorer 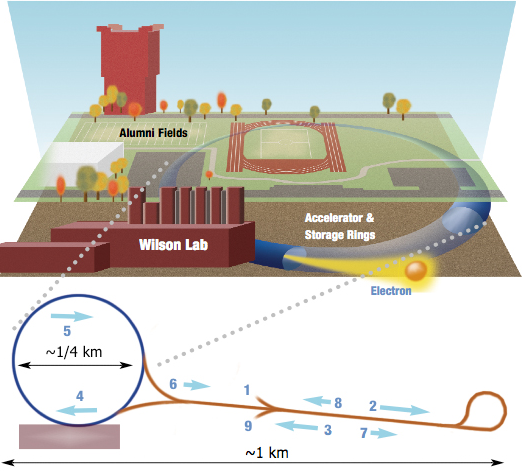 In a tunnel deep below Alumni Fields, electrons accelerated to nearly the speed of light have revolutionized scientific discovery by allowing researchers to form images on the atomic scale using powerful X-ray radiation. Cornell physicists are currently planning an ambitious expansion to this facility, which will provide a more powerful X-ray source which promises to push the limits of atomic imaging. The expanded device, known as the Energy Recovery LINAC (ERL), will use an unprecedented number of superconducting cavities to provide a continuous, bright stream of X-rays which scientists will harness to image tiny molecular objects previously impossible to see. Full Article (html)
The Cornell Daily Sun (pdf) 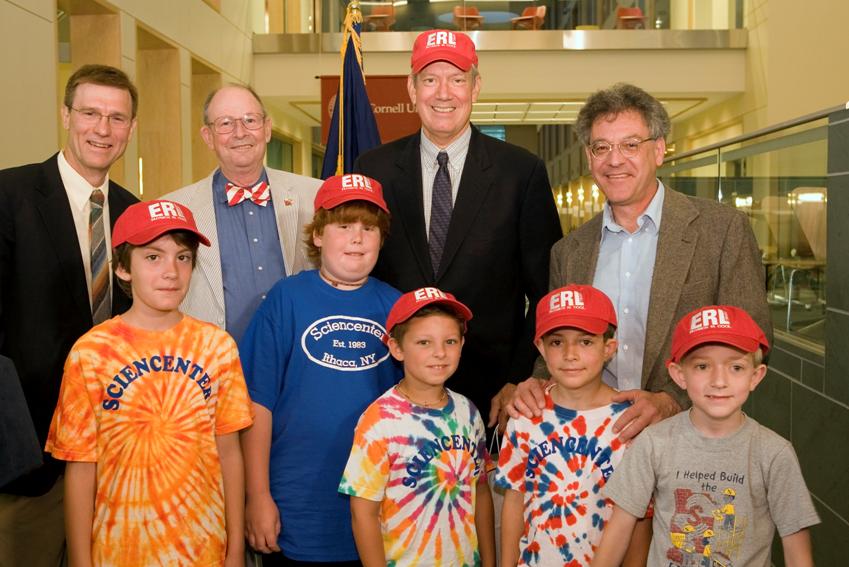 ITHACA, N.Y. -- The National Science Foundation (NSF) has awarded Cornell University $18 million to begin development of a new, advanced synchrotron radiation x-ray source, called an Energy Recovery Linac (ERL). The ERL, based on accelerator physics and superconducting microwave technology in which Cornell's Laboratory of Elementary Particle Physics (LEPP) is a world leader, will enable investigations of matter that are impossible to perform with existing X-ray sources. Published in the Cornell Chronicle Volume 36 Number 23, February 24, 2005. 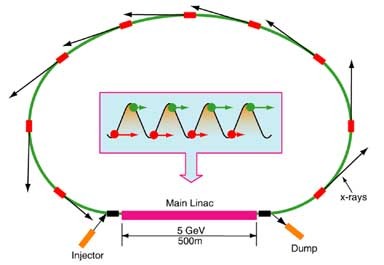 Graphic by: "Review of Third and Next Generation Synchrotron Light Sources" by Donald H. Bilderback, Pascal Elleaume and Edgar Weckert, J. Phys. B: At. Mol. Opt. Phys. 38 (2005) S773-S797
Schematic diagram of an Energy Recovery Linac source of synchrotron radiation. A bright electron source injects electrons at up to a 1.3 GHz rate into a superconducting radio frequency (RF) cavity that accelerates electrons to full energy of 5 GeV (the green balls "surfing" on the crest of the RF traveling wave). They circulate around a return arc producing brilliant x-ray beams in undulators (shown in red rectangles). The circumference of the arc is adjusted so that the path length of the electrons returning to the linac is 180 degrees out of accelerating phase. Thus these (red ball) electrons ride in the trough of the RF wave and now give up their energy to the cavity. After being decelerated to low energy they are directed to a beam dump. Each electron makes one trip around the arc and its energy is recycled in the main linac, hence the name, Energy Recovery Linac. We plan to adapt this schematic concept to the real physical layout of the current CESR storage ring by the addition of further underground tunnel to be connected to the present storage ring complex. The details are being worked out now and an upgrade plan will be presented to the NSF a few years from now.

The National Science Foundation has given Cornell the green light to begin development of an Energy Recovery Linac (ERL), a new advanced synchrotron radiation X-ray source that has far-reaching implications for biology, chemistry and a host of other disciplines. The proposed ERL will feed into the Cornell Electron Storage Ring (CESR) underneath Alumni Field but will produce X-rays with greater capabilities than the University's current synchrotron radiations source can provide. Click here for complete article. Published in the Cornell Daily Sun Volume 121 Number 100, March 2, 2005.

In a major boost for X-ray science and accelerator physics, the National Science Foundation (NSF) has committed about $109 million to Cornell's continued operation of an X-ray synchrotron facility, as well as to develop a new kind of X-ray source that promises to revolutionize the field. Click here for complete article.