By Ernie Fontes (Feb. 15, 2012) The goal of the Energy Recovery Linac (ERL) project at Cornell is to create a new type of continuous-duty x-ray source, and to do so requires making ultra-low emittance electron bunches and accelerating and recovering their energy in a superconducting linear accelerator. Three of the biggest R&D challenges are to prove it possible to build an electron injector with (1) sufficient current, (2) sufficiently small emittances, and a superconducting linac with (3) sufficiently small energy consumption. The NSF-funded prototyping project has already achieved three important milestones and the upper levels of some performance specifications are being extended on a daily basis! Milestone (1): A continuous-duty current of 50 mA out of Cornell's prototype injector has been achieved. This is the world record for any laser driven photocathode electron gun and exceeds the specifications needed by one of the proposed ERL x-ray source operating modes. The highest operating goal - 100 mA - is well within sight. Milestone (2): Cornell's emittances achieved for the bunch cores (the central 2/3 of the electrons in the bunch) are now as bright as the full emittances specified for the ERL. Even better values are expected as the injector voltages are ramped up. This surprising effect - a super-bright core - was unexpected at the start of the project and may dramatically improve the ultimate capabilities of an ERL source. By way of comparison, if the beam achieved today were accelerated to 5 GeV, its emittance would be 30 times below the world's smallest horizontal emittance in PETRA-III at DESY (Germany). Milestone (3): The superconducting cavities need to be extraordinarily efficient for an ERL linac to recover and reuse beam energy. The first ERL-prototype accelerating cavity achieved an efficiency of Q0=2.3E10 at 16MV/m and 1.8K in a horizontal test, surpassing the ERL's requirement. While much remains to be done, these accomplishments and rapid progress show that the Cornell ERL injector, though still a developing prototype, is ready to be coupled to a linac and long undulators to produce the world's first ERL light source capable of producing continuous-duty (1.3 GHz) pulses of hard x-ray beams of unprecedented coherence and short pulse length. 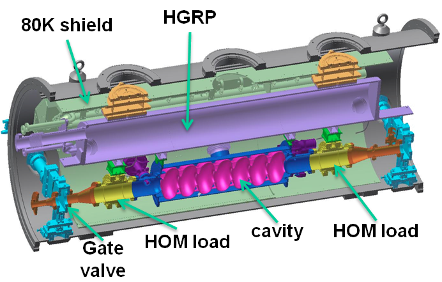